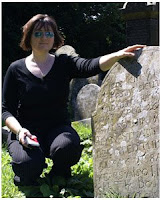 T.A. Moore
lives in Northern Ireland and shares her space with a cat, too many books and a very kick-ass pair of boots. She was one-time leader of the Performance Pros performance group and has plans involving asparagus, a small bus and the kick-ass boots that should come to fruition in 2012.

Her first novel The Even was published by Morrigan Books in 2008 and the sequel will be out in 2010. In addition to her writing Tammy has designed Creative Writing Workshops, written reviews and judged short story competitions.

"A darkly humorous edgy descent into the world of the forgotten gods. Moore's THE EVEN is like a cocktail with hidden spices: a drop of Terry Pratchett, a dash of Justina Robson, a slurp of crushed legends, with the smeared essence of a fallen faery frosting the glass. Lenith is a glittering gothic anti-hero presented against the splattered canvas of a newly imagined underworld. A stark and thoroughly memorable rebellion against sanitised fantasy."
Greg Hamerton, author of The Riddler's Gift

It’s a chick-lit detective novel set in Dublin. My friend wants me to call it Dick-Lit, but I think that will cause confusion. (I know, I know – chick-lit is dead! I’ll think of something else to call it when I’m pimping it around town.) I just finished writing Shadows Bloom, the sequel to The Even, and I’ve my PhD novel sitting in a drawer waiting for the edit.

Q2. Can you give us an idea of T.A Moore’s typical up-to-the-armpits-in-ideas-and-time writing day?

You make it sound more interesting than it actually is! And more full of time. I tend to work 9-5. The mornings I do freelance work – articles, reviews, critiques and the like – and in the afternoons I work on whatever I have going creatively at the time. I tend to sneak an hour late at night to write too. Discipline is important for me, particularly if the WIP (work-in-progress) isn’t flowing as smoothly as I’d like. I’m a world class procrastinator – one of those kids who spent weeks colouring in their complex revision charts and had to cram all the actual revision into two nights – and if I’m not firm with myself I’ll spend the time making buns or cleaning or playing solitaire on the computer.

Not writing? I kid, I kid. It’s important to keep a balance, otherwise you burn out and they find you hiding under a table with a watermelon and a colander. I read a lot. It sounds like a busman’s holiday, I suppose, but it’s nice to just immerse myself in other people’s worlds sometimes. Sometimes I knit – not well, but doing something with my hands that requires concentration but no real THOUGHT (at least, not at the ‘it’s a scarf!’ level of knitting I do) helps me untwist my brain.

Q4. Any advice for a greenhorn trying to break into the urban fantasy scene?

I think the same advice I’d give anyone looking to break into any genre field. Read a lot, write what you’re passionate about and don’t give up. Get BETTER, you always have to be just a little dissatisfied with what you’ve written, but never give up.

Be ready to publicise yourself. Even if you get a big book deal with a major publishing company, they’re going to want you to put yourself about. If you’re working with an indie press, then you’ll need to be willing to put in the work. If no-one knows about your work they can’t read it.

Dashiell Hammett. I know he isn’t a new writer, but I’ve been re-reading Red Harvest and I’m just in love with it. Perhaps because it isn’t a style of writing I envy – or want to emulate – so I can just enjoy the brusque, restless pace of it. Besides, I adore the shameless Dinah Brand.

As far as writers who are still alive go, I am enjoying Stuart Neville’s short story collection ‘The Six’. I like his writing, the taste of Belfast in the prose, the poetry and the prosaic all wrapped together in one.

My favourite fantasy author at the moment is C.E. Murphy. (I don’t think she reads this blog, so it isn’t sucking up.) The Inheritor’s Cycle has pretty much everything I want in a novel – a rich historical backdrop, a cast of distinct, clever characters and endings the simultaneously satisfy and leave me desperate for the next book to come out.

And I haven’t read these yet, but I am really looking forward to Laura-Anne Gilman’s Vineart series. They look fascinating and I can’t wait to see how the world and the magic weaves itself together.

Ill-Met in the Arena by Dave Duncan.

To become implausibly successful and be feted the world over! Or to make at least part of my living doing what I love, I’d settle for that.

Maybe not listen to my third form English teacher when she told me my writing was sordid and disgusting? Mostly though, I’ve no aching regrets about anything I’ve done with my writing. Maybe I should get some?

Oh, that would be the first rejection letter I got from an agent. It was SCATHING. I think that is one of the reasons I’ve never let rejections put me off for long, nothing could be as harsh as that first letter. It said that my novel wasn’t right for their agency and that ‘perhaps another agency would have lower standards.’

I don’t, by the way, think the actual agent involved had anything to do with the letter. In my experience, agents are far too busy to waste time being snide to aspiring writers. It was probably some intern with ideas of being the next Ms Snark, but it was still a shock to read first time out of the submitting gate.

I will be doing a reading and Q&A session in the Lock-Keeper’s Cottage in Castlereagh this November, along with some bloke called...Gerard? Come and see us!

Labels: An Interview, T.A. Moore, The Even

Ah, nice to see you here, Tammy. But what's this about you and Gerard doing a joint reading? He never told me! Perhaps he's worried I'll come along to heckle him. :)

And you reminded me, I haven't read Dave Duncan in years. His Great Game trilogy is one of my favourite fantasy series of all time.

v-word: sarness -- what Gollum eats when he can't be arsed to cook a proper meal.

What is it with you Irish crime writers and Miss Snark? I caught on to her just before she stopped blogging, and she was fantastic. Still is, though not live exactly.

gb, you have been holding out on us on this Castlereagh thing. It's not like I am likely to be able to jet over, but still. You never know, someone might.

Mike - Was going to tell you about the reading, just as soon as I figured out what I was going to read at it! It'll mostly be early PR for our antho, though.

Seana - For my part, I didn't happen upon Miss Snark until I'd learned most of my lessons the hard way; rejections and trial and error and such. But it was Tammy herself who pointed her blog out to me back when Tammy worked for the Creative Writers Network in Belfast. I know Stuart swore by her and Nathan Bransford too. Ms Snark's blog seems a worthy place to get an idea of what the budding writer is about to let his-or-her-self in for.

As I said to Mike, I'll make some noise about the Castlereagh thing when I have it straight in my head. Cheers for the interest, though.

I'm glad Miss Snark left that blog up--it's quite a service she performed there. Of course, if you read too much of it, you realize that all writers are basically demented and unable to follow the simplest instructions.

Yeah, let us know about the reading, we can at least cheer you on from afar.