No Alibis Bookstore are very pleased to invite you to an evening of Scandinavian Crime on Monday 29th April at 6:30PM in the Ulster Museum. Scandinavian authors Arne Dahl and Antti Tuomainen will be joined by local author Stuart Neville to talk about their latest books. Please note: this is a ticketed event. Tickets are FREE, and are available now.

Regarded as one of the finest literary crime writers in Scandinavia, celebrated author, critic and editor Jan Arnald is the man behind the bestselling Intercrime series, written under the pen name of Arne Dahl. The highly praised series of ten novels has sold more than 2.5 million copies and has won its creator such distinguished awards as the premier crime writing awards in Germany, Denmark and Sweden. In 2007 The Swedish Academy of Crime Writers awarded Arne Dahl a special prize for his "vitalization and development of the crime genre through his Intercrime series".

In 2011 Arne Dahl started writing the second book series, the Opcop quartet. The first installment, Chinese Whispers, was awarded The Swedish Academy of Crime Writers'' Award for ''Best Swedish Crime Novel'' of 2011. The series is already a big success in Germany, Denmark and Sweden, and the third novel in the series will be published in Sweden in May 2013.

Finnish Antti Tuomainen was a copywriter in the advertising industry before he made his literary debut in 2007 as a suspense author. The critically acclaimed Veljeni vartija (My Brother's Keeper) was published two years later. In 2011 Tuomainen's third novel, Parantaja (The Healer), was awarded the Clue Award for 'Best Finnish Crime Novel 2011'. The Finnish press labeled Parantaja – the story of a writer who is desperately searching for his missing wife in a post-apocalyptic Helsinki – as "unputdownable". With a piercing and evocative style, Tuomainen is one of the first to challenge the Scandinavian crime genre formula. Antti Tuomainen lives in Helsinki with his wife. His fourth novel will be published in Finland in June 2013.

Stuart Neville's debut novel, THE TWELVE (published in the USA as THE GHOSTS OF BELFAST), won the Mystery/Thriller category of the Los Angeles Times Book Prize, and was picked as one of the top crime novels of 2009 by both the New York Times and the LA Times. He has been shortlisted for various awards, including the Barry, Macavity, Dilys awards, as well as the Irish Book Awards Crime Novel of the Year. He has twice been longlisted for the Theakstons Old Peculier Crime Novel of the Year. He has since published two critically acclaimed sequels, COLLUSION and STOLEN SOULS. Stuart's novels have been translated into various languages, including German, Japanese, Polish, Swedish, Greek and more. The French edition of The Ghosts of Belfast, Les Fantômes de Belfast, won Le Prix Mystère de la Critique du Meilleur Roman Étranger and Grand Prix du Roman Noir Étranger. His fourth novel, RATLINES, about Nazis harboured by the Irish state following WWII was published January 2013.

Posted by Gerard Brennan at 13:07 No comments: 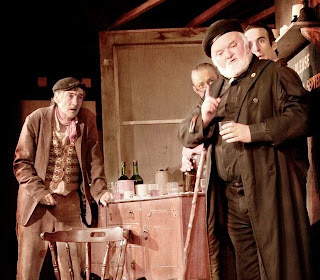 "When Joe Brennan was a boy growing up in Belfast, his grandfather took over a confectionery store in the Lower Falls area, and installed an illegal drinking club in it. Things that happened in the so-called 'Sweety Bottle', and the characters who drank there, swiftly became the stuff of family legend, and were much debated and discussed over the Brennan family dinner table. Forty years later, in collaboration with his son Gerard, Joe has woven a selection of Sweety Bottle stories together in a two-act play, revisiting a place now gone (levelled in the interests of urban redevelopment), but certainly not forgotten in the memories of those who grew up in the West Belfast area.
Good as the stories are (the audience is in a virtually constant state of hilarity), the danger is that The Sweety Bottle could easily have ended up seeming merely episodic, a string of unconnected anecdotes with no particular reason for putting them on a stage together.
The Brennans have, however, managed their raw material much more cleverly than that: from an early stage the narrative is bound together by lugubrious references to a certain Grinder McVeigh, who has torched a neighbouring shebeen for barring him..."
Read the rest here.
Posted by Gerard Brennan at 22:29 2 comments:

Rather timely meme in the light of yesterday's post... 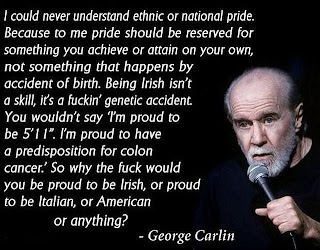 Click the image to enlarge the print.
Posted by Gerard Brennan at 09:57 No comments:

On Wednesday I was a guest at an event organised by Queen’s University Belfast, as an Irish crime writer. '"Thinking Forward Through the Past", a day of events across Belfast profiling the impact of research within the Faculty of Arts, Humanities and Social Sciences.' They mentioned me in the flier and everything, which was quite cool.

My invitation to this event came from Dr Dominique Jeannerod, a French guy with incredibly good taste in Irish crime fiction. I say this with modesty intact; he hasn’t read my books. Yet. The good Dr Jeannerod kicked off the proceedings with a fascinating presentation on the impact of Irish crime fiction in France. Ken Bruen was described as the most famous among this exclusive set of aficionados who have had their work translated and published in France. Stuart Neville is also a prominent diplomat for the genre, and fair play to the Armagh lad for representing the latest generation of Northern Irish crime writers in such a discerning country. I feel qualified to describe French readers as discerning as I paid very close attention to the presentation. It held my interest despite knowing that I was soon to be interviewed by somebody with an impressive and intimidating wealth of knowledge in Irish crime fiction.

And rather than warm me up with a few easy questions, he hit me with this tricky one-two:

Are you comfortable with the description, Irish crime writer?

Are you equally comfortable with being included in THE MAMMOTH BOOK OF BEST BRITISH CRIME or is that a contradiction?

Can of worms, meet chainsaw.

I can't remember what I said, word for word, but I'll rehash the gist of it...

I think it took me longer to get comfortable with calling myself a writer than it did to figure out my national identity. It was after the publication of THE POINT, actually, in October 2011. I'd achieved a decent amount before then, short story publications, co-editing a crime fiction anthology and Arts Council funding – I'd come excruciatingly close to publication with my novel WEE ROCKETS a couple of times as well. But it wasn't until I had the pleasure of signing paperback copies of my novella at No Alibis that I could look somebody in the eye and say, “Aye, I'm a writer, so I am.”

The Irish thing? Well, when it comes to ticking boxes on an application form, I'll pick Northern Irish if it's there, Irish if it's not. I was born south of the border but have lived in the North since I was six years old. I say Derry, not Londonderry. It 's a habit that comes from growing up Catholic. But I don't practice the faith I inherited except to go to christenings, weddings and funerals. But, yes, I'm comfortable with calling myself an Irish crime writer. And I'll not turn my nose up at the sub-categorisation of Northern Irish crime writer either.

Do I belong in THE MAMMOTH BOOK OF BEST BRITISH CRIME?

Well, I have a British passport. A couple of years ago, I needed one fast and couldn't be arsed going to Dublin for it. How's that for swallowing your cultural heritage? A past version of myself might have been appalled at my lack of Irish pride. Nowadays, I'm not that bothered. It's just a wee red book. And TMBBBC is a big read book. I was honoured to have my story in a collection with some of the biggest names in British crime fiction (and a couple of great Irish writers who were also happy with the contradiction). In fact, I'd probably have been pissed off if being Irish had disqualified me. That British passport entitles me, you know!

The event lasted an hour and a half, but Dr Jeannerod (he may prefer Dominique, but I really like the look of Dr Jeannerod) didn't get through all of his questions. I got a copy of them from him and over the next week I'm going to select a handful and basically interview myself... with somebody else's questions. If that seems horribly self-indulgent to you, consider this post fair warning and avoid the blog for a week two. 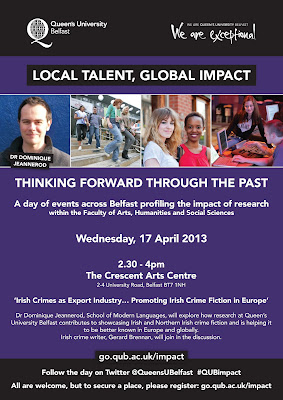 Click on the image for a better look.
Posted by Gerard Brennan at 11:00 No comments: