And as of today I'm the same age Jesus was when he was crucified. Kinda freaky because the next book I release through Blasted Heath takes the piss out of religion a little bit... It's all in good fun, though. Hopefully it won't inspire a lynch mob.

Anyway, my 33rd year is off to a great start. I'm almost done with my creative writing MA and I found out last week that the play I wrote with my da, The Sweety Bottle, has received major funding from the Arts Council of Northern Ireland. This means an all Ireland tour in 2013 with the best actors Brassneck Theatre Company can hire. It's going to be so awesome.

And I'm off work tomorrow. Tonight I will mostly be working on tomorrow's hangover.

Happy birthday to me.

No Alibis Bookstore is very pleased to invite you to an evening with Harlan Coben in the Ulster Museum on Wednesday 18th July at 6:30PM. Tickets are now available price £5 each (£3 concession).

Harlan will be signing and chatting about his two most recent novels “Stay Close” & “Shelter”.

Harlan Coben was born and raised in New Jersey. After graduating from Amherst College as political science major, he worked in the travel industry. He now lives in New Jersey with his wife, Anne Armstrong-Coben MD, a pediatrician, and their four children.

Coben is the first author to win all three of the most coveted literary awards: the Edgar Award, Shamus Award and Anthony Award. His books include the Myron Bolitar series, as well as other standalone novels, including Play Dead, Miracle Cure. Tell No One, Gone for Good, No Second Chance, Just One Look, The Innocent, Hold Tight, and Caught. Harlan Coben's books have been published in more than twenty-two languages.


So, it's time to put the second phase of my self-publishing experiment into action. I gave POSSESSION OBSESSION AND A DIESEL COMPRESSION ENGINE away as a Kindle freebie for one day last month. The aim was to get it onto a few thousand Kindles out there in the hopes that it would yield some reviews, maybe encourage people to take a chance on my other books (published by Blasted Heath and Pulp Press).

Just over 200 copies were downloaded that day. I'm not sure about the knock-on sales effect but I do know that the only review I got came from a reader already familiar with my work (Hi, Katy! You're the best!) so in that respect, the experiment kind of failed.

But I've assessed the damage and come up with a slightly different plan. First of all, I've decided to make use of the sites out there that give shout-outs to Kindle freebies. Some need to be contacted ahead of time so I did that on Monday (I feel so organised). The rest I'll need to hit up on Saturday, the first day of the giveaway. Hopefully that'll draw a little more attention to the book. The fact that it's going to run for two days might improve my odds at getting that download figure in the thousands as well. So basically the same as last time but I've (hopefully) picked a better set of days, extended the freebie time period and told more people.

Well I didn't say it was a great and original plan. Just slightly different.

Whatever the case, I'll report the download figures here early next week.
Posted by Gerard Brennan at 18:34 2 comments:


POSSESSION, OBSESSION AND A DIESEL COMPRESSION ENGINE is now available on Kindle. 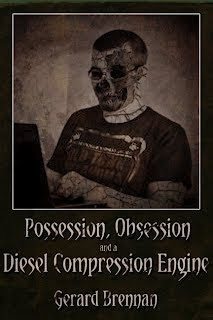 Possessed by the Devil. Obsessed with Rock and Roll. Under the spell of a charismatic Ford Focus driven by a diesel compression engine and a thirst for motor oil. This little collection of horror stories spruced up by a healthy splash of Northern Irish smart arsery revisits some classic themes and tips its hat to some new ones. You'll laugh, gasp and cringe, at times all at once.