(Click the image for a closer look.)
Posted by Gerard Brennan at 10:32 2 comments:

So, two weeks since I got my FIREPROOF themed tattoo and there's been absolutely no perceptible spike in sales for the ebook (I'm judging this by casual checks of the Amazon ranking -- haven't bothered checking with Blasted Heath). Two local papers reported on the publicity stunt and published pics of my tattoo. The bigger papers weren't interested in the end. I almost got a radio interview and some TV coverage but that didn't pan out. A few people saw pics of the tattoo on Facebook and Twitter but to the best of my knowledge, those are the folks that already have copies of the book.

PR guru I am not. I think I'll leave the marketing to the publisher from now on.

But am I pissed off by this epic fail?

Nah, I got a badass tattoo at the end of the day. See me smilin'? 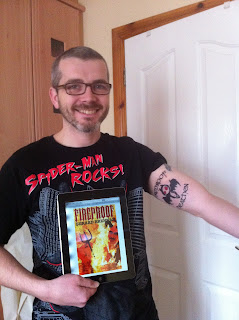