Peolple are lovely, aren't they? Admittedly, I'm in a very good mood today, but they really are.

Here are a few things some lovely people have said about my writing.

Paul D. Brazill gives WEE DANNY a short review/shout-out on You Would Say That, Wouldn't You?

Seana Graham reviews WEE DANNY as well, over at Not New For Long.

Eva Dolan reviews WELCOME TO THE OCTAGON in the latest issue of Crime Factory (page 143).

And for the first time (to my knowledge), my work has been reviewed in French. Quite extensively. If Google Translate is to be trusted, it's an informed and positive review. I think. Any French-speakers out there want to confirm that for me? The review is by Dominique Jeannerod and it's posted on Europolar.

Man In The Moon by Pearse Elliott


A promo video for MAN IN THE MOON, Pearse Elliott's new play, starring Ciaran Nolan, brought to you by Brassneck Theatre Company.

I'm looking forward to seeing this in a couple of weeks. What about you?

Dates and venue pop up at the end of the video.

If you're not in reasonable travelling distance to Belfast, consider this promo a tasty wee short film. Let's make this thing to go viral, yeah?
Posted by Gerard Brennan at 10:25 No comments:

I’m working on some narrative non-fiction, which is the fancy name for a memoir. It’s a book about my experience of depression following the publication of my first novel, Fodder, how perfectionism can be both a constructive and destructive force, and how Cognitive Behavioural Therapy can help even the most tenacious of depressives.

I write even when I don’t have ideas, because bashing away at a keyboard seems to help ideas form. Writing time is different to normal time – it goes fantastically, disappointingly, quickly. I forget to eat, drink and sleep when I write. I’m in another world, and after a long period of writing time, I feel like I’ve been meditating.

In my day job, I’m Creative Director at Belfast-based advertising agency Genesis. I come up with ideas for campaigns, develop scripts and oversee creative production. I also have an 8 year old daughter, who is made of starshine and diamonds, and in whose wake I stand transfixed.

I’m more a writer of contemporary fiction rather than crime fiction, but when it comes to breaking into anything, plain old-fashioned doggedness is the key. Hang in there. The more you write, the better you get, so believe in what you do, even if you don’t always believe in yourself.

There is a superb novella called Down the Rabbit Hole by Juan Pablo Villalobos. It’s inspired by Mexican crime fiction, and is about a crime family, but it’s more literary fiction than crime fiction. The concept is so simple, the protagonist so genuine, and the prose so tight and controlled – it completely blew my socks off. I wish I’d written it.

Once I finish the memoir, my agent, New Yorker Paul Feldstein, whose agency is based in Northern Ireland, will find a publisher for it. Well, I hope he will! Paul is as dogged as I am, so I’m optimistic. After that, it will be a return to fiction.

God, yeah. I wouldn’t have burnt out after my first novel and lost five years to depression. But in a way, almost destroying myself is what it took to produce Fodder, so I can’t truly regret it. It’s not something I’d advise anyone to try though.

After Fodder was published, I was invited to appear at various festivals and events, all of which I really enjoyed – except one. I took part in a panel on a high profile London arts show, and was asked to decipher a poem by an Irish poet who was known for her indecipherable poetry. And she was sitting right beside me, in all her flowing, ethnic, Irish colleen, impenetrable glory. I’m a novelist, not a poet. I had no idea what it was about. So I waffled. And giggled. I made a face and looked like a dick. Then I melted into a puddle and poured myself into a bin. I developed a deep-seated fear of poets after that, but there was a silver lining – my resulting phobia was in the inspiration for Poets Are Eaten as a Delicacy in Japan.

The Arts Council of Northern Ireland and, in particular, Damian Smyth, have been crucial to the development of my writing career, and not just in terms of financial support, although that has certainly played a part. Damian’s belief in the quality of my work gave me a real boost, when I needed it most. I thought I was crap. Damian put me right. Thanks, Damian.

Thank you, Tara West!
Posted by Gerard Brennan at 14:48 No comments: 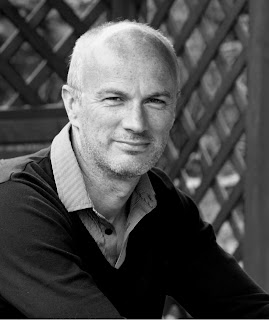 I'm currently on the edit of my Irish War of Independence thriller featuring Michael Collins.

My writing day forms the book-ends of my real day. I usually start with a cup of strong tea at about 5.30am or 6am and work through to about 8am. Then I'll do a few hours in the evening once I've begged our four insomniac children to go to bed. I find tea-drinking very helpful, so I consume gallons of it. Some days rivers, in fact.

Carousing, bull-fighting, big-game hunting, drinking absinthe - sadly I'm not Ernest Hemmingway. I work as a part-time journalist and look after the children for the rest of the week. A great excuse to spend afternoons exploring rivers and forests.

I've been reading a Russian fellow called Dostoyevsky. Wonderful sense of noir. Apart from that Gayle Curtis' Shell-house is a hidden gem. Her haunting sea-side setting has a mesmerising effect. And my interviewer's Fireproof was an entertaining read with its teflon-coated black humour. Worth the cover price for the description of Lucifer, alone. Elsewhere, Declan Burke and Ken Bruen continue to prove they are masters at the height of their powers.

The Psalms, in German. Seriously. A wonderful antidote to the corrupting influence of writing about the criminal mind.

As a rookie journalist I once managed to offend the newspaper's Polish readers by misspelling a single word in a front page headline. Something to do with the death of the Pope and the unfortunate similarity between the Russian and Polish words for goodbye.

Thank you, Anthony Quinn!
Posted by Gerard Brennan at 10:12 8 comments: