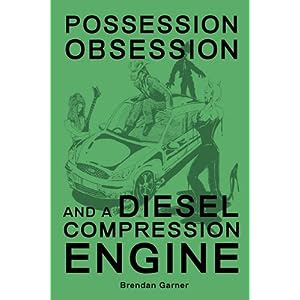 Okay, I'm needy. Please validate me by reviewing my work. Your efforts will not go unrewarded. The first three people to review either THE POINT or WEE ROCKETS on Amazon (and notifies me about it by leaving a comment on this post) will receive a signed copy of my rare chapbook, POSSESSION, OBSESSION AND A DIESEL COMPRESSION ENGINE. It's a collection of six interlinked humorous-horror short stories, the first being the piece of flash fiction below that'll give you a taste of the style.

This offer is open to all countries. It's a light book (45 pages) so postage isn't an issue.

He lay in his bath of blood and sang O Fortuna at the top of his voice. The blood had cooled and clotted, but he felt far too comfortable to be bothered with scraping off and getting dressed. This was the only time he had to himself, away from the office politics and embezzlement investigations. He wanted it to last for as long as possible. Besides, this one had taken more effort to fill than previous baths. His muscles still ached from the exertion.

The best bathing blood had to be extracted from frightened accountants. The easy part had always been scaring them; you just told them there was a problem with the bottom line or gave them a debit-heavy Balance Sheet. The tough part was catching them. Those chaps worried so much they built up an unhealthy supply of nervous energy. As soon as they got that adrenaline rush they moved like lightning. Skinny fellows they were too. Very hard to hold on to when they squirmed.

This particular bath had taken him a whole day to collect for. The effort of the chase, the strength expelled twisting the accountants from their ankles to their necks, holding them upside-down over the bath; it vexed.

The only motivation when under such a strain was the promise of that pop; the sweet sound of a head letting go when it reached the maximum point of elasticity. And the splash-back refreshed him so much he was always able to twist one more. Corny but true; the harder you worked at something the sweeter the reward.

He relaxed and thought about the time he tried to fill the bath with lawyer blood. Now there was a lazy species. It took barely three hours to gather enough of them to fill his bath to the brim. Such a slovenly bunch. Not one of them tried to run or even struggle in his grip. Half of them attempted to bargain their way out of it with a jumble of highbrow words. Hitherto and henceforth and whatnot. The others did nothing at all, the sudden change from hunter to hunted too much for their shark-like minds.

Although the easiest bath he’d ever prepared, he hated it. It took three accountant baths to get rid of the toxic smell. Lawyer blood emanated a horrid whiff. And it clotted at an alarming rate. It formed a thick skin on the surface that hung from his shoulders like a cloak when he climbed out of the bath. A wonderful effect visually, but damned impractical. He rarely experienced the heebie-jeebies, but those lawyers hit all the wrong buttons. He vowed never to have anything to do with that species again. It wasn’t worth the hassle.

He gazed upon the emaciated accountants strewn around the floor. He sometimes worried there would not be enough to keep him in bath blood forever. The thought made him uncomfortable and he knew it could not be ignored. Every batch got skinnier and balder than the last. Not a great sign. But he had to bathe. It was his great escape.

He would begin experiments with alternative sources. Perhaps scientists were a good place to start the experimentation. It had a certain poetic justice to it.

The sticky, clingy feel of congealed blood interrupted his thoughts. Cursing, he got to his hooves and stepped out of the bath. He picked up the nearest twisted body and wrapped it around his waist. He still felt good about discovering a use for the broken remains. If only he could utilise all the pairs of spectacles he had accumulated. It seemed such a waste of good honest craftsmanship to let them gather dust in his spare room.

With a sigh, he picked up his trident. In one last instant of escapism he upended it and held it like a guitar. He fingered a silent pentatonic blues scale; the one he liked to play at the crossroads. Thunder rumbled in the back of his throat. Time to get back to the office. The place just fell apart without him.

CALIFORNIA by Ray Banks
In California Banks introduces us to Shuggie, an ex-con who may have finally figured out how to control his temper. He's on a mission to get from Calfornia, Falkirk, to California in the US. All he needs to do is collect the ill-gotten loot he'd stashed in his home town and get gone. Simple enough, so long as nobody gets in his way.This is a short, straightforward read that is exceedingly well written. The insight into Shuggie's psyche is chilling in its stark authenticity. Banks is a heavyweight in the gritty Brit crime genre. Powerful.
SHOTGUN GRAVY by Chuck Wendig

Atlanta Burns, a teenager with attitude... and a shotgun. Shotgun Gravy is almost like Falling Down in high school. When a teenager with a reputation for brutal violence decides to go on a crusade against the bullies in her town it isn't long before she fnds herself and her ragtag mini-gang of friends in serious trouble. Noble as her intentions may be, she's bitten off way more than she can chew.This novella is a shotgun blast of a read. Highly recommended. I'll be very interested to see what Atlanta Burns gets up to in her next adventure.

BARRACUDA by Raymond Embrack
This is a novella that oozes tongue-in-cheek wickedness. The hyper-reality that Embrack has created in Blonde City is tweaked to crystal meth levels. Peter Surf is a badass protagonist that the reader has utter faith in. Faith that he will strike down upon his enemies with great vengeance and furious anger. The plot is your basic revenge tale but the fun Embrack has with it livens what might have been a flat, worn-out story. The gangs of criminals the protagonist encounters could have been spewed from the mind of Tarantino if he were on a bad acid trip. Considering the pricetag, you can't afford not to buy this novella. Download and enjoy immediately.
You'll find links to these novellas on my Amazon profile page.
Posted by Gerard Brennan at 21:35 5 comments: 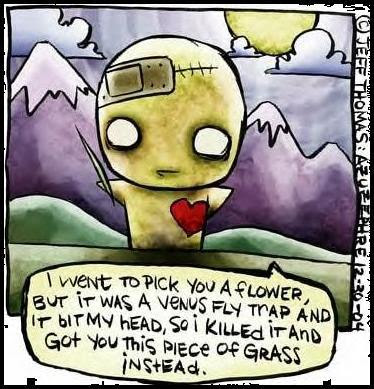 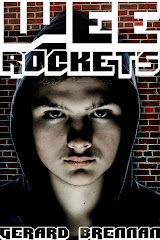 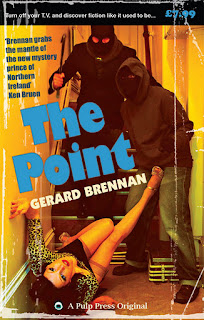 "Noir from Norn Iron! A lean slice of grindhouse from Belfast's new crime hack." - Wayne Simmons
THE POINT, Amazon UK
THE POINT, Amazon US
Please note, THE POINT is also published in paperback and is available at the wonder emporium that is No Alibis, Belfast (still the only bookstore with signed copies!), and in selected branches of Waterstones across NI. If your favourite bookshop doesn't have it on the shelf, just order it in.
I thank you for your indulgence.
Posted by Gerard Brennan at 12:10 1 comment: 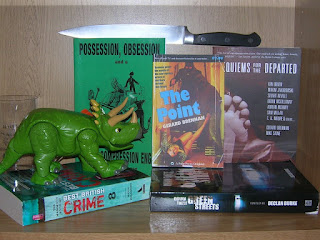 Irish crime fiction connoisseur and altogether cool melon-farmer, 'Critical' Mick Halpin sent me this funky pic. I've decided he should call it 'Stuff What Brennan Has Written and or Written For and Some Other Stuff'. Catchy, right?

Thanks for making me smile, Mick!
Posted by Gerard Brennan at 11:56 2 comments:

Well, feck. THE POINT has only gone and scooped the Best Novella Spinetingler Award. Bloody marvellous!
Many thanks to all those who voted. According to the folks at Spinetingler Magazine there was only a few votes in it so every one actually did count.
I'd blather on a little more but I'm still pretty blown over by the whole thing. I'll say one thing, though... you could do a lot worse than to pick up a copy of all the nominees' novellas. I'm halfway through the list and they're all brilliant books. Probably why I'm still scratching my head over the whole thing.
Cheers
gb
Posted by Gerard Brennan at 21:23 13 comments: