The title? Bumming and blowing? It actually doesn't have any sexual connotations (yes, I lower the tone so you don't have to). The Belfast side of my family use this phrase when they think somebody is boasting. "Him? Ach, he's just bumming and blowing again..."

Why is this titled so? I've been thinking about writing an 'end of year' blog post for a few days now, and can't help but think that it can only read as an ego trip on my part. I just want to tell everybody what a great year I had without boasting. Not easy, and the temptation is to simply say nothing. But I don't want to be ungrateful either. The year's been very good to me and my wee family. Rest assured, we've had plenty of downs to go with our ups; nobody gets an easy ride. And while I've had good luck, I've also worked my backside off. Seriously, it's quite a bit smaller than it was at the start of the year.

This being a blog that's supposed to be about reading and writing, I'll just mention one momentous day in 2013 that changed my entire life.

13/3/13, I saw the first stage performance of The Sweety Bottle and found out that I'd been accepted onto a funded creative writing PhD at Queen's University Belfast. Thank you to Brassneck Theatre Company and all who've helped me at QUB's School of English (staff and fellow students alike). Some individuals deserve more thanks than others, but I'm too scared that I'll leave somebody out and offend them, so no list of names. I do need to thank Blasted Heath, however, the awesome digital publisher that believes in and pushes my prose beyond all my expectations.

But, yeah... 13/3/13 (or 3/13/13 US Style, though I prefer the symmetry on our side of the pond). That was an incredible Wednesday, dampened only by the fact that one of my sons managed to get something stuck up his nose and had to be taken to hospital. Up, up, down. But even the nose incident was a nice reminder of how good I have it. My wife took care of the boy and sat with him for hours in A&E while I watched the play with my father (and co-writer of The Sweety Bottle), my mother, my eldest sister, her husband, their baby (in bump form) and a bunch of Brennan family members who were able to attend.

I have one resolution for 2014. Work harder.

If I continue to put the effort in, I get to be a full-time student and writer -- that's right, no office day-job for the foreseeable future -- until well into 2016. After that...? 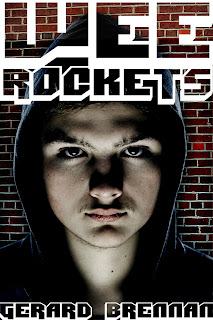 AND, if you post a picture of the cover to prove it's on your Kindle, iPad, tablet or whatever you read ebooks on (tag me in a Facebook post to alert me) [edit Sunday 29/12/13: screen-grab or take a digital photo with your smart phone, whatever works], I'll send you a copy of my novella, BOUNCE, anywhere in the world. Even if you bought WEE ROCKETS months ago, you're eligible simply by posting a pic.

I have 5 copies of BOUNCE here, so first five pics scoop the prizes.

You can listen to a few chapters from BOUNCE here, BTW.

I'll be sending the booklets out tomorrow.
Posted by Gerard Brennan at 11:51 No comments:

T'is the season to read ebooks...

As if 2013 hasn't been kind enough to me (I'll write about that in a few days), at the very end I find out that WEE ROCKETS has made it into the Amazon '12 Days of Kindle 2013' sale. Until the 5th of January, you can snag my novel for 99p. This is due to the awesome strategy skills of the folks at Blasted Heath. They rock.

I've spotted some other great Blasted Heath books in the sale. Look for Douglas Lindsay and Anonymous-9 as well.

And, I see Declan Burke has two top quality offerings on there too. Happy, happy days. Get some reading done, people.
Posted by Gerard Brennan at 12:29 4 comments:

Sorry I didn't get you a card, but this is better anyway. Happy Whatever You Celebrate! Unless you don't celebrate anything, in which case, fair play to ye. Hope you have another excuse to get temporarily lazy at some point in the year.

Posted by Gerard Brennan at 11:26 No comments: 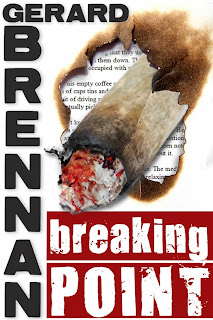 It struck a chord, though. I was always fond of the Bill and Ted "Be excellent to each other!" philosophy. This has a slightly sinister edge, but I think I'm okay with it. Must be the Christmas cheer. 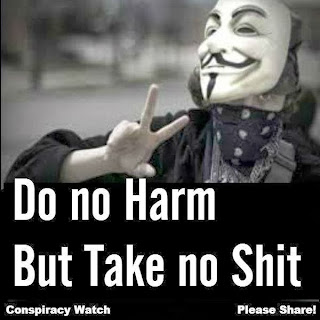 If I might offer a little constructive criticism (anonymous, I mean well, please don't destroy my website), I'd suggest the creator drop some of those capital letters. Or capitalise the 'no' on both occasions. But that's just me.

Labels: i am not procrastinating, it's research

Look at this lovely book. Arrived today. I suggest you get yourself a copy, asap. 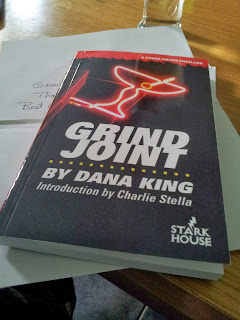 Here's what I said about the book on Twitter; "GRIND JOINT by Dana King. The spirit of THE WIRE reincarnated with JUSTIFIED charm. Gangster-rich US crime fiction at its best."

Yes, I compared a book to a couple of TV shows. But I feel okay about it. Dana King has a few tongue-in-cheek references to TV shows included in the book, and they work well. They give the story a real sense of self-awareness, you know? No? Well I know what I mean.

I hope to read more from this universe. There's one badass character in particular that I'd love to find out more about. Must start hassling Dana to write it.
Posted by Gerard Brennan at 10:38 5 comments:

You'd be hard pressed to think of a better definition...

Paul Bishop (co-creator of the Fight Card series) posted this on Facebook earlier. It really struck a chord. 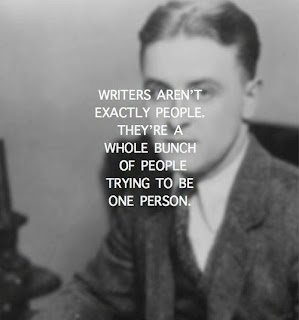 Writers might be big ol' bags of crazy, but they're never bored.
Posted by Gerard Brennan at 09:41 1 comment: