I'm still a little discombobulated following the completion of my novel, DISORDER. Now, I say completion, but there will be more work, no doubt. Even if my PhD supervisors, by some great miracle, consider it a work of genius, they'll have suggestions for improvement, as will the small band of beta readers who have received the manuscript over the weekend. That's the thing with books. You'll find something to tinker with right up until the day it's published, and sometimes after that.

But back to the discombobulation (I'm getting my mileage out of that word -- yeah spellcheck, it's real). I happen to be a good chunk into another manuscript already and have ideas for another book that I'd like to start and finish this year. There are other projects in the works as well, but since the best way to hear God laugh is to announce your plans (hat-tip to Sam Hawken for that little pearl of wisdom) I'll not go into any detail about what they might be or how quickly I need/want to complete them.

So what's the point of this post? I don't know, really. Maybe I just want to mark the occasion of having completed another novel. Could be I'm procrastinating because today is the day that I plan to get neck-deep in my other novel-in-progress. Most likely I just want a reader or two to give me a virtual pat on the head and say, "Well done, Gerard."

In other news, my reading pile is diminishing at a quicker rate than it did in 2014. That was an example of God laughing at my plans, I think. I'd set myself the task of reading 100 books in that year. I stopped counting about five months in because I was running way behind schedule, but I'm sure I didn't make it to 100. Probaly closer to 50, truth be told. I did start reading faster after I stopped counting, though. A revelation that probably means something. I should note a few stand-outs that I never got around to reviewing. Just the NI ones for now:

Blue is the Night by Eoin McNamee

The FANTASTIC conclusion to McNamee's 'Blue' trilogy. I'm not sure what McNamee has planned next, but I feel like I could go back to the start of the 'Blue' trilogy and read it again before his next work of genius comes out anyway. There was a distinct closing of the circle at the denouement of this novel that drew my mind back to the The Blue Tango and Orchid Blue. I just wonder if I'll get around to that reread before the next McNamee becomes available to me.

The Final Silence by Stuart Neville

The Final Silence is the fourth of what has been dubbed the 'Belfast' series. I read this one during a busy time (hence the lack of review), and blazed through it. Neville publicly 'fessed up to a long bout of writer's block a little after the release of this novel. It was The Final Silence that bore the brunt of his dry patch. I'll not make light of the difficulties he experienced (which Neville outlines in this very honest blog post), but what I will say is that The Final Silence eventually became an excellent novel. A fine example of how to write a thriller. In fact, it's my favourite of his works now, a spot previously occupied by Collusion (which Neville also had trouble completing, if I remember right). The Final Silence very recently picked up an Edgar nomination. It seems I'm not alone in realising that this is a particularly strong book.

The Blame by Michael Nolan

Nolan does not see himself as a crime writer, and neither do I. However, due to the subject of The Blame (the aftermath of a bad batch of Ecstasy tablets), the work cannot help but touch on criminal activity in Northern Ireland. But this novella is not about the crime. It's about the protagonist trying to figure out if he is to blame for the death of a friend. And it's not just himself he has to convince. The question still remains unanswered for many in his circle of family and friends and those within his wider community. It's a fast and energetic read and a wonderful showcase for Nolan's developing writing talent. I hope to see a novel from him in the near future.

There may have been other NI novels that I failed to review, but they've yet to occur to me, and this post is getting too long as it is. In my next post, I'll simply list the books that inspired and facilitated the writing of DISORDER.

Currently reading The Dead Ground by Claire McGowan, by the way. I'd started it before the new year. Before I went to LA, in fact. The only reason I stopped after the first few chapters is because I didn't want to bring it on my journey to Bouchercon. It's a signed hardback, y'see. More on that one when I finish it.

The fourth book in the ongoing Sean Duffy series was released this month. Gun Street Girl is set in 1985, and again, Adrian McKinty uses actual events from Northern Irish history as a backdrop for the tale. While the story starts out as a murder investigation -- and one that could have been tidied away quite quickly if a team of shittier cops were handed the case -- it isn't long until DI Duffy and DS McCrabban find themselves embroiled in something much bigger.

As you would expect from McKinty at this stage, Gun Street Girl is a wonderful read. The books seem to get funnier as the series progresses, but they're balanced out with plenty of gut-punching moments of darkness. McKinty is a master of emotional manipulation. If you don't feel something when you read this one, you might be dead inside. Book an appointment with you GP tout feckin' suite.

I wish I could pinpoint exactly why I find McKinty's books so readable, but I haven't quite figured it out yet. What I do know is that in the few days that I gorged on this one, my copy was never more than a few metres away from me. Sean Duffy is my favourite series character right now, and it'd take a hell of a lot to knock him off the top spot. Gun Street Girl is a stunner, plain and simple.

As a side note, it's interesting that McKinty has gone beyond a third part for this series. He called time on the Michael Forsythe or "Dead" series of books because he felt that the character had had his fair share of adventures and a further foray would stretch his readers' suspension of disbelief a little too far. I presume that the fact that Duffy is a cop makes it more believable that he'd get into more scrapes, especially a cop employed at the height of the troubles. Whatever the reason, I'm delighted to have read another Duffy book and hope to read more of them in the future.

Also, I love the fact that Duffy is ageing at the same rate as me. We're both 35 this time around! That's really cool.
Posted by Gerard Brennan at 18:39 2 comments:

Now here's a book with a holy terror of a concept. An unspecified future date, a new country/republic off the coast of war-torn Total America and a bunch of new rules to be obeyed, bent or broken. The one thing missing from this future version of the world?

Until a virtual reality programmer is set the task of bringing Jesus back.

Johnny, a recently widowed computer-whiz, is called in to create the first version of a new religious VR programme by a tyrannical corporate suit by the name of Garçon. When does it need to be delivered? Yesterday. Bear in mind that this is a world that has seen many of the population fall prey to VR addiction. It's also a place where you can legally buy most drugs. The only one to remain illegal is heroin. And that is super-gangster Paul McBride's bread and butter. And when Johnny's world collides with McBride's, a whole new circle of hell is created.

Wayne Simmons has outdone himself in the ideas department with this one. I felt many a smirk stretch my face while reading his wonderful/terrifying predictions for the future. And then there are the characters. I've only mentioned three in the paragraph above (if you don't count the plastic Jesus), but there's a roster of hopeful heroes and ne'er-do-wells that'd rival one of Stephen King's casts in his more epic works. Plastic Jesus isn't a 500 page doorstop however. It's lean, mean and not-so clean. And it's well worth your time.

Have you found your Plastic Jesus yet? 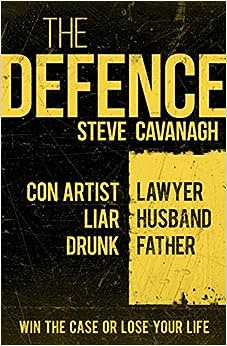 Get ready for a legal thriller that’ll grab you by the throat, whisper sweet nothings in your ear and shove a gun muzzle in your belly. Eddie Flynn, a New Yorker who has flirted with both sides of the law, makes his explosive debut in THE DEFENCE by Steve Cavanagh. Lawyer Eddie Flynn is about to discover that his criminal past is both a burden and a blessing. With the Russian mob on his case, he has to draw on his old skills as a con-artist to keep himself and his ten-year-old daughter alive. And yet, with every hard fought victory comes another challenge for the quick-witted, grifting lawyer. The Russian mob, the NYPD, the FBI, the DA, and his own personal demons are queued up to take a swing at him. Ladies and gentlemen, THE DEFENCE never rests.

Cavanagh's debut will be released in March. Pre-order it here.
Posted by Gerard Brennan at 11:20 No comments: