It's a Knockout! (Bet nobody thought of that headline)

Check out the info from the Brassneck Theatre Company press release:

BRASSNECK PACKS A PUNCH WITH NEW, HARD-HITTING BOXING PLAY
From the producers of smash-hit shows Man In The Moon, The Sweety Bottle and A Night With George, Brassneck Theatre Company will punch their way onstage in early November at the Grand Opera House with their latest production Lemonade Sandwich written by Mick Draine, directed by Tony Devlin, and starring Gerard Jordan (Game of Thrones, The Fall).
This hard-hitting new play is based on a true story that follows a young amateur boxer Gerard McManus, who battles with drink, drugs and street violence after several tragic events unfold throughout his young life, struggling to overcome the odds and turn his life around.
But it isn’t a story of doom and gloom, rather one of inspiration and hope as we see Gerard, with the help of his friends strive to become “UK Body For Life” champion and a successful boxing and life coach. Gerard endeavours to deal with all that life throws at him to coach Paddy Gallagher all the way to the 2010 Commonwealth Games finals in Delhi and pulls a few moves of his own in order to get halfway around the world for the chance to see his man fight for a gold medal.
Bringing boxing to the stage, Lemonade Sandwich portrays a love of sport and sheer determination showcasing Gerard the coach, Paddy Gallagher the boxer and his Northern Irish boxing team mates in a way that has never been seen before. Gerard McManus’ story is brought to life in the play through struggle and heartache, but what is most prevalent is the ‘fight’ within him and his steely determination to help these young boxers reach their full potential.
Director Tony Devlin believes the show highlights what a person is capable of achieving even when faced with life-changing adversity: “I’m delighted to see Lemonade Sandwich coming to the stage as it brings sport to life and attracts a brand new audience to the theatre. It’s a truly inspiring story about
overcoming the worst that life may throw at you in order to make a real difference in the lives of others. It’s a very high impact show, definitely one that’s not to be missed. It’s sure to be a knockout!”
Gilly Campbell, Arts Development Officer for Drama, commented: 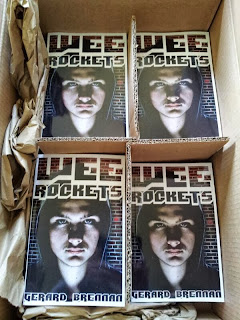 I got the first batch of WEE ROCKETS paperbacks today. Opening that box made me so happy. I've been dreaming about seeing this book in print for years. It didn't happen the conventional way, but feck it. These are changed and challenging times as far as publishing goes. The reviews and sales of the Blasted Heath e-book were enough to convince me that the novel deserved a dead-tree version.

So, I'll have a small number of copies to bring with me to the KILLER BOOKS festival in Derry 1st - 3rd November. You can get all the details of that mega weekend a few posts down.

Here's hoping I can sell a few, eh?

Now that I've seen how gorgeous it is, I'll be ordering more and will sell them directly (payments via paypal most likely), signed and/or dedicated if that's your thing, to anybody that wants one.

Form an orderly virtual queue there, will you?

Just contact me by email or through one of the social medias. You'll find links in the previous post.
Posted by Gerard Brennan at 20:27 2 comments:


I'm a sucker for the aul buy one get one free deal come grocery time. It's not just me, is it?

If not, here's my wee attempt at a BOGOF deal:

Buy a copy of WEE ROCKETS in paperback (Yes! That happened!) from Amazon UK or US. Send me a picture of you reading said tome (with your permission to post it here) via Facebook, Twitter or the email address over on the upper right there, and I'll send you a signed copy of THE POINT or WELCOME TO THE OCTAGON (your choice) in paperback absolutely free. I'll even pay for postage and pen ink. Extra points (and a mystery prize if I can think of one) if your pic makes me laugh.

I can't do this forever, so for now, let's say that the first three wonderful folks to send me the pic win. If it goes well I might extend this. If there's no interest at all, I'll shrug and say that I don't care, but really I'll be a wee bit hurt. Then I'll get over it.

I believe I've laid all my cards on the table. Your move.

P.S. If you prefer to support your local bookshop, fair fecks to you. I'll run another comp if/when an independent bookshop stocks some of the copies I've ordered for myself. It might take a few weeks to sort, but we'll get there.
Posted by Gerard Brennan at 09:04 No comments:

Killer Books, y'all. Check it out. My mug's in there, somewhere near the back.

I am so looking forward to this. The list of writers attending is unreal.

Why are you still reading this blog post? Click the link.
Posted by Gerard Brennan at 14:23 No comments:

Right folks, consider this a heads-up. UFC 166 is on tomorrow night. I'm going to watch it (until I fall asleep -- main event is meant to start at 3am GMT) and I'll enjoy it.

And since MMA is on my mind, I thought I'd push my novella, WELCOME TO THE OCTAGON.

It's a Belfast-set, modern-day, action-packed story about a man who dreams of fighting in the big leagues. And the PAPERBACK version (yes, an actual dead-tree book, all you non-electronic-readers) will be available for £3.99 on Amazon UK or $4.99 on Amazon US until Monday. Then I'm setting the prices at £7.99 and $9.99 for a long-long time.*

This weekend is your last chance to get WELCOME TO THE OCTAGON for half price, guys.

Read the first chapter for FREE by clicking on the cover image on Amazon.

Or take McDroll's word for it. I especially like the fact that this review was written by a non-MMA fan:

"If you enjoyed Fight Club, you'll love this. Life on the tough side of Belfast as illegal fights are held in the upstairs rooms of pubs. Guys pummel each other to near death as bets are taken in the shadows. What motivates these fighters? For Mickey, it's his eight year old daughter Lily he fights for; keeping the wolf from the door and taking care of her since her mother's death. But when Mickey tries to go 'legal' he discovers why his new manger Swifty's offer seems too good to be true. Great story, fight action well described and a good old fashioned goodies v baddies showdown. You don't need to be a fight fan to enjoy this - give it a go!"

Labels: cutting me own throat, fight card, McDroll, mma, Welcome to the Octagon

So, this is happening to the WEE ROCKETS:


Yes, thanks to the cool and ridiculously sober Kyle MacRae, WEE ROCKETS will soon be available in print format. I'm hoping that it'll be ready in time for the KILLER BOOKS festival in Derry (1st to 3rd November) and that somebody will buy a copy.

I'm pretty excited about this, you know. WEE ROCKETS has sold relatively well as an ebook, but I'm dying to see it in dead tree format. Here's hoping it turns out as well as I've imagined.

If anybody is interested in picking up a signed copy who can't make it to the festival, drop me a line and we'll work something out.
Posted by Gerard Brennan at 20:10 8 comments:

So, this is happening: 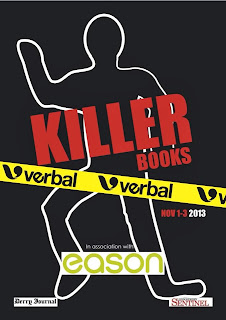 The Derry Journal wrote about it yesterday, and you can see that article right here thanks to the wonderful world wide web. It's really whet my appetite for the event. I'll be there as an author and a fan.

Brian McGilloway includes a longer list of authors who are due to take part in the event on his Facebook page. For those of you who don't do the social media thing, fair play to you, and here's what Brian said yesterday:

There's going to be SO MUCH FUN! If you love crime fiction as much as I do, like.
Posted by Gerard Brennan at 10:12 2 comments: