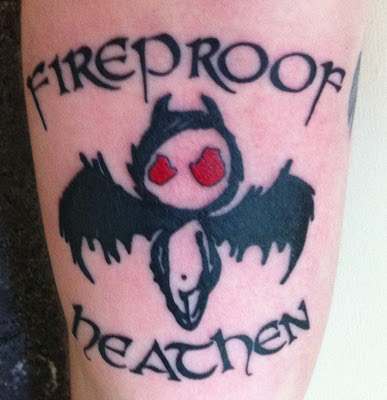 My latest tattoo was inspired by my novel, FIREPROOF, with a hat-tip to the publisher that believed in the wacky story, Blasted Heath.

The lovely Mrs B pointed out earlier today that I'll need to sell way more books to cover the cost of this tattoo. Maybe I'm not the marketing genius I thought I was...

Buy ALL my books, please.

I need the royalties. 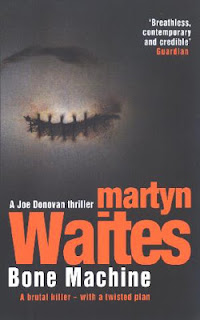 A Wee Wayne Simmons Review - The Surrogate by Tania Carver

A shocking double-murder scene greets Detective Inspector Philip Brennan when he is called to a flat in Colchester. Two women are viciously cut open and laying spreadeagled, one tied to the bed, one on the floor. The woman on the bed has had her stomach cut into and her unborn child is missing.

But this is the third time Phil and his team have seen such an atrocity. Two other pregnant women have been killed in this way and their babies taken from them. No-one can imagine what sort of person would want to commit such evil acts.

When psychologist Marina Esposito is brought in, Phil has to put aside his feelings about their shared past and get on with the job. But can they find the killer before another woman is targeted?

I’ve a terrible habit of reading a series the wrong way around. 2009’s THE SURROGATE, although the first chronologically in Tania Carver’s Brennan & Espoisto series, is actually the third that I’ve read to date; THE CREEPER being my first and CHOKED being my second. This may have affected my enjoyment of THE SURROGATE, this book being my least favourite Carver so far.

It’s less pulpy and more procedural than later entries, Carver’s economic delivery even more punchy as the series progresses, but the main focus as ever remains on our two protagonists DI Phil Brennan and his love interest Marina Esposito. They’re a likeable, if at times pedestrian, duo and their will-they-won’t-they romance is as much of a driver for the story as the crime.

And what a crime it is. This isn’t a book for the squeamish, our killer’s prey being heavily pregnant young women and their soon to be conceived babies. It’s shocking stuff, to say the least, and Carver doesn’t hold back when it comes to relaying the full horror of each crime scene. Our list of suspects is quite tight, the focus of the investigation very compact, with few red herrings. But the pages keep turning nonetheless; Carver’s storytelling strong and addictive throughout.

THE SURROGATE is a recommend in its own right and a solid introduction to one of the strongest UK crime series out there right now. Tania Carver, the writing name for husband and wife team Martyn & Linda Waites, is a forced to be reckoned with, bringing hard-boiled storytelling to the UK police procedural. It's a page turner, Carver's use of short chapters and sharp prose a sure way to power you through its 400 plus pages.

But probably best to skip breakfast before reading...