I still get the scoop on new Northern Irish crime fiction from time to time.

Check out this interesting video...

Somebody buy Adrian McKinty a wallet that says BAD MOTHERFECKER on it.

Here he is in the Wall Street Journal. 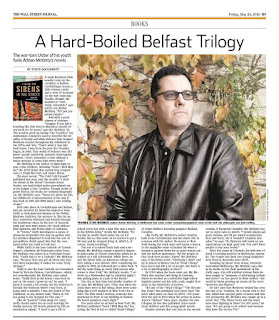 Thanks to the Spinetingler Magazine Facebook page for providing the jpg.

And if you're having trouble reading the jpg, I swiped this link from the wonderful Crime Always Pays.

Labels: Adrian McKinty, I Hear The Sirens In The Street, Sean Duffy

Where am I… From?

A few weeks ago I posted links on Twitter and Facebook that led to Keith Nixon's review of my latest novella, WELCOME TO THE OCTAGON. Unfortunately, my posts were more concerned about the solitary comment from an anonymous source about where I’m ‘from’ rather than the content of the review. At the time I made light of the comment, because it seemed funny (like a clown and like a weirdo). I like to think I’m pretty good at not taking myself too seriously. Comments like that shouldn’t jibe with me.

But since then, it’s niggled once or twice.

Now, I know that the average anonymous comment is designed to niggle. I also know that I’ve been blessed if this is the only seemingly negative thing that’s been said about my work in the last month (to my knowledge!). But I figure if there’s an itch, you should scratch it. Or slap it, as a tattooist might suggest you deal with post-ink itching.

So, here’s the score:

I lived in Omeath (seaside town, south of the border) for the first six years of my life.

We moved to Warrenpoint (seaside town, north of the border) and lived there for ten years.

When I was 16 we moved again to a really nice house that was somewhere between Warrenpoint and a little village called Burren (no seaside there).

My parents have since moved to an even nicer house in Burren, but I had my own place by then.

After a bit of messing about in The Holy Lands (Damascus Street, South Belfast), I moved to West Belfast with my girlfriend (who became my wife and the mother of my children). We lived in the Iveagh area, Beechmount and the Old Suffolk Road in the space of five years.

We moved to Dundrum when the kids started to arrive. I live there now but travel to Belfast most days for work.

I went to school in Omeath, Warrenpoint, Burren and Newry, respectively. All of my further and higher education happened in Belfast.

To be honest, I don’t know where I’m from. I imagine I had a southern accent when I lived in Omeath but don’t remember anybody taking the piss out of it in primary school. My accent has since become a strange hybrid of Belfast-y/County Down culchie. The hint of Belfast in my accent was remarked upon once (that I remember) when I went to post-primary school in Newry (St Colman’s College if you must know). It seemed that the accuser thought I was faking it. Trying to act hard, maybe. I think I just inherited a few twangy words from my da.

It’s no coincidence either that I can ham up a passable West Belfast accent. Years of listening to Westie grandparents, aunties, uncles and cousins provided that. I used it in a short one-man show I performed a few years ago; An Irish Possession. I also managed a generic southern accent for one of the characters I played, though I’m not as good at that one.

So, I’ve got family in West Belfast, have lived in West Belfast, owned a house in West Belfast, but I’m not ‘from’ there. I’m from Omeath, I guess, because I was born there. But I’ve lived in Northern Ireland for a little under 30 years. I grew up in Warrenpoint (or was it Burren?), so maybe I’m from there? But here, I went to school in Newry… does that count for anything? How about the fact that I have lived in Dundrum for 9 years? Can I claim that as my stomping ground? Well, no. I’m a blow-in there, you see. Ask a local.

Tell you what, next time somebody asks me where I’m from, I’ll tell them I’m from all over the place. I can be claimed or denied by whoever, whenever. It's really not that big of a deal. But if an inquisitor presses me, I’ll borrow from my inherited West Belfast humour and cadence.

“Where are you from, Gerard? Really?”

If WEE ROCKETS ever gets made into a movie, I want this guy all over the soundtrack. A Belfast hip-hop beat poet.


But if you don't dig on rap music, you can always listen to my take on Belfast crime right here in this extract from WEE ROCKETS:

Crimes recorded in NI down by 3,000 on previous year

Now, I'm not going to suggest that there is a direct link between the fall of Northern Irish crime and the rise in Northern Irish crime fiction -- that'd be crazy talk -- but maybe the good people of NI owe it to the likes of Adrian McKinty, Brian McGilloway, Stuart Neville, Claire McGowan and the rest, to pick up one of their books. Maybe two. If nothing else, it'll fill the hole that a lack of criminal enterprise in 2013 has created.
Posted by Gerard Brennan at 20:06 1 comment:

Another No Alibis Event!

No Alibis Bookstore and Portnoy Press
Invite  You To The launch of
John McAllister’s
Latest novel
THE STATION SERGEANT
…..who will break his first case (of wine) at
No Alibis Bookstore,
83 Botanic Avenue, Belfast
On Wednesday 1st May at 6.30pm. 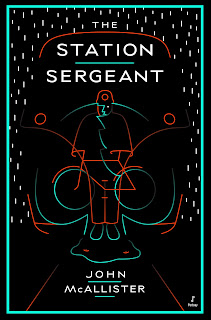 When unpopular farmer, Stoop Taylor, is found dead in a field, Station Sergeant John Barlow has a feeling his comfortable life is about to be turned upside down.

Battling local hoodlums, the Dunlops, who are stealing cattle to order, and seeking a traumatised German soldier at large, Barlow finds his personal problems have multiplied as well. His schizophrenic wife turns violent, his daughter is growing up too fast, and the new District Inspector wants him demoted and transferred. To top it all off he has fallen in love with another woman.
The Station Sergeant - One man, one mission: to protect those he loves and find the killer in his community.

Please advise either JOHN or NO ALIBIS to keep a wine glass for you.
Posted by Gerard Brennan at 11:59 1 comment: