Well now. That aul' saying about waiting for a bus all day and two come along at once seems to apply here.

Tonight I start my eight-week crime fiction course at The Duncairn in Belfast. Really looking forward to getting stuck in. I always find that teaching makes me more energetic when it comes to my own writing, and the book I've been trying to finish for the last few weeks could do with a wee boost.

But here, there's more (hence the two busses thing). You know that Noireland thing I was telling you about in the last post? That crime fiction convention you've been hearing loads about on Facebook and Twitter and all? Well, they've recently announce an addition to the programme. A day full of writing workshops! And I'm part of that. Here's what it says on the Noireland website:

A NOVEL IN THREE ACTS

Gerard Brennan will begin the day by introducing you to some of the fundamentals of writing a crime novel. From plotting, writing a crime character and then on to creating a three act structure for your novel.

Gerard Brennan recently earned his PhD in Creative Writing from Queen’s University Belfast. His publishing credits include Undercover (2014), Wee Rockets (2012) and The Point (2011); winner of the Spinetingler Award for Best Novella in 2012.

And the super-talented Claire McGowan is taking the afternoon shift:

Now that you've gotten to grips with the basics, Claire McGowan will talk in more detail about character, viewpoint and dialogue. She’ll address how you create suspense in your novel and what to think about when writing a crime series.

Alongside a successful career as a novelist Claire McGowan runs an MA in creative writing at London’s City University. She regularly gives workshops and talks at festivals and has taught in the Guardian Masterclass series.

How cool is that? Go register for it. Now.

Posted by Gerard Brennan at 10:48 No comments: 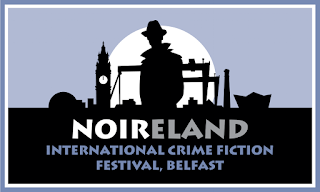 There's a new crime fiction festival on the circuit. And it's in Belfast! Yeeeooo!

NOIRELAND is brought to you by David Torrans of No Alibis Books, and considering his standing in the crime fiction community, here and internationally, that's so fitting.

I could talk it up here, but you don't need me to. All you need is this link to their snazzy website and you'll get all the information you need. Maybe sign up for their newsletter as well to make sure you don't miss any updates. I did, and I got a sneak-peek at the events programme. Some major names in there!

I'll be there, soaking it all in. It's going to be class.
Posted by Gerard Brennan at 16:12 No comments: