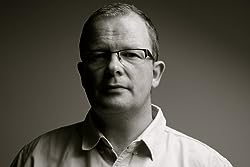 Brian McGilloway has a brand spanking new website that you've got to check out. Right now! Also, he can be found on Twitter, and the really privileged might be able to befriend him on Facebook.