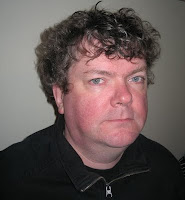 I live in Dublin, I’m married and have two small boys. My first novel, The Dark Fields, was published in 2002 and is currently being made into a movie by Universal Studios – though I have been saying that for seven years. My second novel, Winterland, is being published in November by Faber and Faber and in February by Minotaur Books in New York.

I’m about halfway through Bloodland which is a sort of lateral sequel to Winterland. What’s a lateral sequel, you ask. I have no idea. I’m not writing a series in the traditional sense, but some characters from Winterland are carried over and the style and structure is very similar. But whereas Winterland was firmly set in Ireland, Bloodland has a more international dimension and deals with aspects of the global resource wars, and commodity supply chains, especially in relation to illegal mining in the Democratic Republic of the Congo.

Q2. Can you give us an idea of Alan Glynn’s typical up-to-the-armpits-in-ideas-and-time writing day?

I get up very early, 4.30-ish, and work until my two boys get up. When they’ve gone to school, I work until early afternoon, at which point the boys re-appear and take over. That may seem very disciplined and structured, but within it lies a universe of chaos – lots of displacement activity, staring at the wall, toast. It depends on what stage of a book I’m at. The further in, the more intense and productive it gets. The very early stages are the hardest, drawing ideas together into something half-way coherent. It’s like trying to pick mercury up with a fork. It often doesn’t feel like work at all and you can easily end up being convinced that you’re clinically insane.

I don’t want to sound pretentious, but when you’re a writer, you’re never not writing, it’s always there – but away from the laptop, no surprise, I like reading and watching that latest version of the sprawling Victorian doorstop, the DVD boxset. I like going for walks, plugged into my iPod. I lived in Italy and picked up a love of cooking, so I do that a lot.

Not really. I’ve been at this seriously for fifteen years and Winterland is only my second novel to be published (there are several others in a drawer), so I mightn’t be the ideal go-to guy for advice about breaking into anything. Having said that, I would agree with the idea that you shouldn’t “write for the market”. That never seems to work. Be true to your own style and vision, and don’t give up.

One is Gillian Flynn, whose Dark Places is a great book that isn’t afraid to mess around with time-frames and the reader’s sympathies. Adrian McKinty is another. His Fifty Grand is a powerful and violent revenge thriller that seems to operate on some kind of rocket-fuel from the very first page. And Megan Abbott is a delight, James M. Cain reincarnated. I’ve read Queenpin and am looking forward to her earlier two.

Mainly research stuff. I’m reading Adam Hochschild’s King Leopold’s Ghost and also re-reading Michela Wrong’s In the Footsteps of Mr Kurtz. What I wish I was reading – and will be soon – is Blood’s a Rover.

Finishing Bloodland is about as much future as I can deal with at the moment - I write painfully slowly so there’s still plenty of it left. I have a couple of screenplay ideas I want to work on, but there’s something quixotic and slightly bonkers about writing screenplays – unless, that is, you happen to be best mates with a studio boss, which I’m not. Whatever the next novel presents itself as, that’s what I’ll be working on. There’s something about the novel form – one hundred thousand words, however many pages, sentences, paragraphs – that is incredibly satisfying to write. If I can keep on doing just that, it’ll be fine by me.

Yeah, I‘d do a lot less sitting around waiting for the phone to ring and fretting about what people might think. I’d waste a bit less time doing unnecessary research and would trust instinct and intuition a bit more. And when Mephistopheles called by the house that night all those years ago, I guess I would have said, ‘OK, feck it, you’re on’.

Tech-wise, I once lost eighty pages I’d absolutely slaved over – eighty pages, I seem to remember, of the most exquisite, shimmering, Banvillean prose ever committed to a computer screen. Clicked the wrong button or there was a power-cut or something. So I’ve been obsessive about doing multiple back-ups ever since.

I have just read "The Dark Fields" and the inner structure of the book is finely tuned, with many resonances with tragedy and neo noir.

I thought of Seneca and Ibsen.

A remarkable achievement and a "must-read".

I'm delighted to have found your fascinating blog.

TFTBW - I haven't read The Dark Fields yet, but I have read Winterland and I'd flag that one as a must-read. I'll be sure to hunt out a copy of TDF in the near future.

I'm delighted you took the time to comment. Stop by again, won't you?

I don't know if your have signed up with the Irish Blog aggregator, Irishblogs.ie. It's very helpful for keeping up to date and when you tag posts on your blog, they appear under those categories on the site.

TFTBW - Thanks for the tip. I've just signed up for irishblogs.ie.

Now, I'll just sit back and wait for the traffic spike!

I found an interesting academic site that you might enjoy.

M Buckley - Thanks for the link. Looks like an interesting site overall, but I'm especially interested in the Glynn review...