Something For The Weekend?

Patrick McCabe and The Poetry Chicks. If you're in and around Derry, this'd be the place for you. Don't know much about Mr McCabe? Declan Burke does... the jury remains out, though. 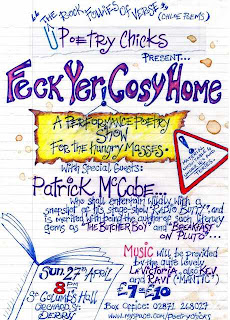 Patrick McCabe, the acclaimed Irish novelist behind such best selling books as The Butcher Boy and Breakfast on Pluto, will be reading in Derry as one of the special guests of the Derry-based group the Poetry Chicks to mark their new stage show, Feck Yer Cosy Home!, which will run, for one night only, at The Playhouse's St Columb's Hall Orchard Street this Sunday, April 27 at 8pm.

Shortlisted for the Man Booker Prize for both The Butcher Boy and Breakfast on Pluto, Clones-born Patrick McCabe has become well known for his mostly dark and violent novels set in contemporary, often small-town, Ireland. His last novel, Winterwood, published in 2006, was named the 2007 Hughes & Hughes Irish Independent Irish Novel of the Year and been short-listed for the IMPAC Award. He is currently completing a novel called The Holy City about sacred rapture and a protestant called Dolly Mixtures.
Feck Yer Cosy Home! is brought to you by two of the three Poetry Chicks - Abby Oliveira and Pamela Brown, under the direction of Ann Hamilton. The show boasts new and exciting material that has never been performed before and remains true to the Chicks' mantra - that of truth, humour and reality with no apology, excuse or apathy and is further enhanced by music and visuals to accompany their words.

Also performing at this much-anticipated event will be Victoria Geelan, Ravi Sharma and Kevin McAleese from psychedelic funk groovers, Mantic - "...a fireball of psychedelic funk rock energy to burn your ear-balls and hypnotise your eye-drums".

So, come out of yer cosy homes and here's hoping we see you all there!