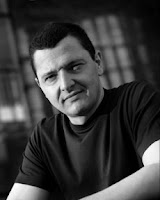 Jason Johnson, born in Enniskillen, Northern Ireland, has been often described as the Irish Irvine Welsh. He is the author of two novels published by Blackstaff Press; Woundlicker and Alina. CSNI tracked him down and asked him some questions. Here’s what he has to say for himself.
Q1. What are you writing at the minute?

I've just finished flushing a third of a novel I'd written down the toilet because I got so bored with it. It was badly planned and I ran out of enthusiasm. The world doesn't need any more books like that, so I'm starting again.

A friend and I have been working on an idea for a futuristic TV drama series about a failing business park in rural Ireland. We've got the plot down and an episode written and we're happy. We've caught up with people who might be able to help, and the feedback is very strong so far - and how many times have you heard that line before?

Also I've been working on a longer term project too, a sort of self-help book for atheists who just can't take any more of the madness.

Q2. Can you give us an idea of Jason Johnson’s typical up-to-the-armpits-in-ideas-and-time writing day?

Not really. Ideas show up unannounced whenever they like. Sometimes I have to drop everything and send a text to myself or I'll forget what it was. A few days later I might look it up and have no clue what it meant, so that's not an exact science.

I need full, clear days to write. It's hard for me to tune in for an hour here or there with other things going on around me. It's best if I basically stop communicating with the rest of the world and just force myself to get stuck in after breakfast. That's when I try to build on the ideas I'd had.

It's a mystery to me why it can sometimes be so difficult to start writing. It's like going to the cinema in that it's a pain in the arse to get organised and go but you never regret it when you're there.

Mostly the things that pay the bills. Beyond that, I go to as much stand-up comedy as I can, play muted trombone, practice hakas and play poker with dodgy bastards.

There's a fair bit of reading, but not with any particular pattern or direction. I like anything that is funny, smart or bold.

Time at the gym is now history because I just couldn't create the habit. I always felt like I was in some kind of Orwellian factory. I walk a lot these days as penance.

If you know you're a decent writer, then that's your ticket. Develop an idea that means something important to you, work on it with passion and forget about planet earth in the meantime. Self-belief is your diesel. If you become fixated with an idea, you're in luck. Your instinct knows there's something with potential going on there and instinct is a great guide. Relish any criticism you get along the way because whatever they say, they're saying you're fighting. And remember, there's a lot of shit writers making money out there so take comfort from bad books.

I want to tell lies here but the truth is I haven't read any crime fiction or any novels in a while. I'm not often in a literary loop. The last novel I read was Tourism by Nirpal Singh Dhaliwal which damn near blew me off the toilet. It's a wild, free-rolling feast for anyone who's ever been in London or been drunk. In the last few months I've been reading about life coaching, addictions, religions, the Scissor Sisters (the rodent-faced Dublin murderers, not the band) and a book on the art of war.

The 33 Strategies of War by Robert Greene.

In terms of novels, polemics and other literature, it's just to develop the ideas I have. The only thing in the way is getting the time and space I need to do that, so really that's the main plan - to get more freedom and use it well.

Not really. I'd maybe have started taking it more seriously a bit earlier, but that's all. So not really. My writing so far has turned out as planned.