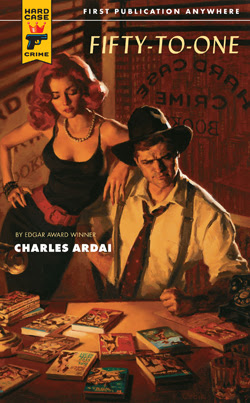 The concept of this book is an interesting one. Charles Ardai (along with Max Phillips) founded Hard Case Crime just about five years ago with the intention to bring the world “...the best in hardboiled crime fiction, ranging from lost noir masterpieces to new novels by today’s most powerful writers, featuring stunning original cover art in the grand pulp style.” A commendable mission statement, wouldn’t you say? Or is it a company objective? I can’t remember.

Anyway, back to the book’s concept. Fifty-to-One is the fiftieth pulp-style paperback to be released under the HCC label, and to mark the achievement, Ardai challenged himself to write an old fashioned crime caper with a chapter named after each of the books in the series. In the order they were released! What a cool idea. But what kind of a man puts himself through something like that?

A talented one, it would seem.

The more cynical among us might point out that Ardai is in a pretty nice position as editor of HCC, and to release a novel through your own publishing imprint isn’t as big an achievement as it would be to sell it somewhere else. Well, I’m not that cynical. Not anymore. Because in reading Fifty-to-One I’ve gained at least a little insight into what Ardai must have put himself through to make it fly. I mean, some of those chapter titles are just out there, yet they all snap into place to form a great tale.

Set in the 1950s the story is told, for the most part, through Tricia Heverstadt, a wet-behind-the-ears country girl from . She arrives in at the start of the book and in the first chapter, titled Grifter’s Game, she learns what kind of place the Big Apple is. Penniless and homeless in a city she doesn’t know, and there’s so much more bad luck to come. There are less than a handful of POV switches, including a chapter from a fictional not-so-true crime novel (published by a shady house with a name you might recognise), but Ardai has a nice method of passing the baton from one character to another that keeps it all tidy.

Ardai spins us a fun, comedic yarn featuring smokin’-hot dames, Keystone-type cops, ‘Shut Uppa You Face’ Italian mobsters, crooked bookies, blackmailers, unlicensed boxers, smut-peddling publishers and crime fiction writers. And that’s only the half of it. The writing is straight-forward, the dialogue snappy, and the excitement, twists and action scenes are ever-present. Characters by the name of Spillane, Block and Westlake show up too! It’s a book about bad luck and moxie in the face of adversity. The only thing that disappointed me was the underuse of the word ‘moxie’ but I’ve made up for that now.

The plot is of the variety employed by Declan Burke in his crime caper, The Big O. Fun-filled and coincidence-ridden with some dark undercurrents driving the characters’ motivations. It’s a lovely combination and I’m impressed. But then, you’d expect quality from a writer whose past work has earned him a Shamus Award. Yup, that’s right, folks, a little bit of amateur detection turns up the fact that Charles Ardai’s pseudonym is Richard Aleas (Dick Alias?), and his novel Songs of Innocence won best PI paperback in 2008.

Fifty-to-One is a wisecracking novel from a wizened and highly-respected era. Thanks be to Hard Case Crime for bringing back this kind of book. I want more. Luckily, I’ve a copy of The Max by Ken Bruen and Jason Starr at hand. And I wouldn’t mind a few more titles from the range for Christmas. Just putting it out there guys. Still plenty of shopping days left...

I've just been catching up on last week's interviews, and the things that struck me time and again was the commitment of the people behind the titles and, of course, the covers. In an ideal world I'd have enough money and shelf space to build a personal library of Hard Case Crime books. Even then, I doubt I'd have the time to read them. I will definitely be dipping my toe in the pool soon, though.

Thanks for the kind words, Gerard. I had an enormous amount of fun writing the thing, and if it gives other folk a chuckle or two, I'm delighted...

Yeah, I reckon the HCC series would be an education in crime fiction. Wish I could just take a year and read one a week. But, I gotta live a little too, you know? Still, I'll do what I can, when I can, to cross some of these novels off my wishlist.

Charles - T'was a pleasure. Thanks for stopping by.

"Richard Aleas" is simply an anagram of "Charles Ardai," though perhaps an especially apt one.
===================
Detectives Beyond Borders
"Because Murder Is More Fun Away From Home"
http://detectivesbeyondborders.blogspot.com/

Peter - There's me posing as a wordsmith and I can't even decipher a simple anagram! Janey Mac. Fun thing to do, though.

You give me too much credit. I heard about the anagram from Charles Ardai himself at an event here.

Brendan Ranger would make a good pen name. My favorite anagram of my own name is Zesty Provoker.

Peter - Zesty Provoker? Very you. In a similar vein, maybe I could be Darn Barn Genre. Does it make sense? Maybe if I did an adaptation of Old MacDonald.