The Twelve and Twenty Thousand 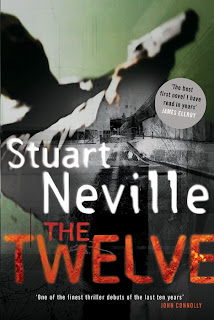 Back when CSNI got its 10,000th visit, I reported that Adrian McKinty's Fifty Grand had been bought by Serpent's Tail for UK release. Well, just under another 10,000 visits have rolled around since then and I've news in a similar vein. Stuart Neville's The Ghosts of Belfast has sold to Soho Press in New York in another two-book deal worked out by agent Nat Sobel. And in the states it'll still be titled The Ghosts of Belfast. However, the UK edition, to be published by Harvil Secker, have decided to go with a name change. It'll be called The Twelve. And look at the pretty cover they've designed for it. A cracker, eh?

So, what's wrong with using Belfast in a title for a UK release? Well, Ian Sansom might have touched on it in a recent workshop I attended. He was told by a publisher, when pitching his novel set in Northern Ireland, that two of the most boring words in the book world are Northern Ireland. Well, I don't know about that, but let's just assume it's true for argument's sake. If the Norn Iron talent is getting out there with work that is sold on the basis of killer story and deft writing, rather than the diminishing interest the rest of the world has for anything to do with The Troubles, then fine. Just goes to show how good the new breed of Northern Irish writer really is. The most boring setting in the world, brought back to life by the huge talent that resides there.

Someone said here recently that Belfast in a title was commercial suicide (it might have been Stuart Neville quoting Colin Bateman, but I'm not sure).

At the time I kinda wrinkled my nose at it, but if I cast my mind back a few years, I can recall a time when my perception of NI was very different to what it is now. Probably the only "Irish" book I'd read up to five years ago was Eamonn Dunphy's earnest bollocks biography of U2. So yeah--
NI = religion and politics = snoozefest.

I'm a much more enlightened man now, though. (c:

And to be fair, LA Confidential sounds a lot sexier than Belfast Confidential. And Streets of Laredo is a lot more hummable than Back Alleys of Strabane. I could go on, but won't.

Mike - Yeah, Colin Bateman said that a few times. Harvill Secker have proven him right, it seems. Glad to hear you're more enlightened, and I think as time goes on, you'll be at the tip of the spearhead, thanks to the likes of Bateman and Neville and the rest.

Colin - Speak of the devil, eh? I don't know, though. The Back Alleys of Strabane has a ring to it.

The title Elmore Leonard wanted to use for "Up in Honey's Room," was "Hitler's Birthday," but the publisher told him Hitler didn't sell anymore.

Funny though, the title of the French edition is going to be, "Hitler's Birthday."

It's interesting that the US will still go with "The Ghosts of Belfast." I wonder which we'll get in Canada. Oh well, I'm really looking forward to it, no matter which title is used here.

John - It's all a puzzle to me, man. But like you, I'm just looking forward to what's behind the title.

Thanks for the plug, Ger.

The title had been an issue for a while, but it just so happened that a change was put to me again a few days after Colin commented on a blog about Belfast being a hard sell. I can't remember if it was here or over at Crime Always Pays.

There is a perception, as Michael points out above, that anything from NI is going to be more dour self-important worthy social commentary. If I'm honest, I'll tend to give stuff about here a wide berth, unless I know it's going to be something different (like Colin's work, for instance). I think that's a preconception NI crime fiction is going to have to struggle against if it is to really break through.

For American readers it's an entirely different proposition. The very connotations of Belfast that might turn off UK readers will have a resonance for those across the Atlantic.

Stuart - No problem at all, sir.

Incidentally, Colin's work was the first I'd ever read that approached the aul Troubles thing from an original point of view, so I reckon he was the first to do it. And if he wasn't, the other guy wasn't good enough to grab my attention. I guess Mister Bateman's owed respect or something for that.

Of course, given the business we're in, that was in fact a double bluff. Belfast titled books sell MILLIONS but I'd really prefer to keep the field all to myself. Too late now, suckers!

Colin - You're an evil genius.