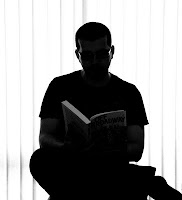 So, today’s the day of my first reading. Less than four hours from now I’ll be at the Lock-Keeper’s Inn with T.A. Moore. I plan to read a short story from my chapbook, and if there’s time, a short extract from The Wee Rockets; the novel that earned me an Arts Council SIAP award and a literary agent. I’d hoped to bring copies of Possession, Obsession and a Diesel Compression Engine with me to flog, but (possibly because of the postal strike) they didn’t make it from the printers. Ah well.

I don’t seem to be as nervous as I should be. Maybe it's because I spent a year and a half as a kung fu instructor. I’m kind of used to standing at the top of a room and talking about something I’ve studied inside-out for years. But it’ll be interesting to see how I feel when I actually get to the venue. I doubt it’ll run smoothly, but I think I’m a big enough now to get over myself if my reading isn’t on a par with all the great writers I’ve seen at these things over the past two years.

Speaking of which, after my own reading, I’ll be taking a spin over to Lisburn City Library to see a veteran at work. I haven’t seen Garbhan Downey read before, but his material is top notch. Unless he’s speaking in another language, he’s bound to please the crowd.

After his No Alibis Launch for Mystery Man, (Colin) Bateman explained that he let his writing do the entertaining. He’s gifted with a fantastic sense of humour and his readings always earn real belly-laughter. He’s due back in No Alibis on the 16th November at 6PM, incidentally. I’m reading Day of the Jack Russell now. It could well be even funnier than Mystery Man, so do your best to make it to that one. I’ve encouraged my wife to accompany me for the first time since the Connolly and Hughes reading last year. Really looking forward to that.

I’ve mentioned the James Ellroy event more than once, but it’s a very big deal, so bear with me while I mention it again. In fact, just click here to read my article for International Thriller Writers. I devote the first paragraph to where, when and how to get the tickets for The Demon Dog of American Literature’s visit to the Waterfront Hall in Belfast.

And while I’m linking to other sites, check out this post from BlackWaterTown, who’s written a great article on his recent trip to Ireland. Note that he’s taken a certain someone’s advice and called in to No Alibis... It’s nice when people listen to you.

I'm sorry I can't make it this evening. I hope all goes well for you &Tammy

I think it must be done by now, so you must tell us how it went...

seana - I am back and had a great time, but I stopped off at another reading on my way home and now I'm knackered. Hopefully find some time to report on it tomorrow. Thanks for asking.

So your first reading experience wasn't either terrifying or embarassing?
Already one up on McKinty.

I’d hoped to bring copies of Possession, Obsession and a Diesel Compression Engine with me to flog, but

Sorry I couldn't make it, Ger, but glad to hear it went well. Hope to see you on Saturday night!

Ta for the link.
Back in December to see what N.A. has on then.