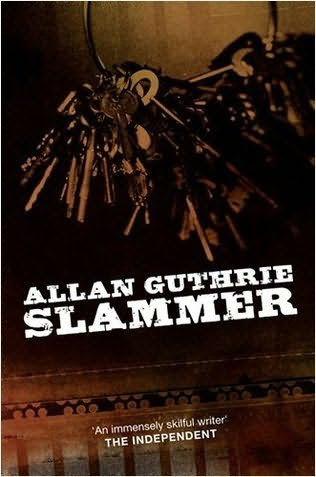 I picked up Allan Guthrie’s Slammer expecting a multi-POV crime caper. Before then, my Guthrie experience consisted of the books featuring Gordon Pearce, a Scottish hard man with a violent past, present and, most likely, future. But what I got was something very different. Where books like Two-Way Split, Hardman and Kill Clock are gloriously action-packed and at times comic-bookish in their violent joy, Slammer is a more thought-provoking psychological thriller. Now, I loved the Pearce books, but this latest one... I think it has the potential to pull a whole new breed of fan to Guthrie’s work.

In Slammer we get to know Nick Glass, a young Scottish prison guard who just isn’t cut out for the job. His colleagues see him as a soft target for practical jokes and the prisoners see him as an easy touch. So much so that he gets bullied into a very awkward situation. But then he gets pushed too far. Thus the tagline; “And when Glass breaks he might just shatter...”

I’ve always been interested in prison based stories. Having studied books, movies and TV programmes like The Shawshank Redemption, Animal Factory and Oz, I consider myself quite well versed in the crime fiction subgenre that is the prison drama. And I was impressed by how real the prison scenes in Slammer came across. Now, in a CSNI interview Guthrie revealed that he’s not one for in-depth research, but for this novel he did pick the brains of an ex-prison guard by the name of Tom Laird who helped him add a little gritty reality to the novel. And these anecdotes obviously added quite a bit to the feel of the scenes. Right now, Slammer is at the top of my list of favourite prison stories, in any medium.

But the book does not survive on prison anecdotes alone. It’s so much more than that. Through the character of Nick Glass, Guthrie demonstrates a thorough understanding of the psychology of a man on the verge of a breakdown then goes deeper still when Glass is dipped even further into a mental abyss. It is a scarily believable decline. Unfortunately, there’s not much more I can say about the plot or the protagonist that won’t spoil some excellent twists and reveals. Just know that you’ve a lot of impressive stuff in store when you pick up Slammer. And existing Allan Guthrie fans needn’t worry. He hasn’t forgotten his roots either. He still manages to kill a small animal and dismember a character or two, just to keep it old school.

Marco - Exactly. Apparently it's okay to off a tonne of people in a novel or movie, but animals...? That's a sick step too far.