This blogpost was first posted at The Psychopathology of Everyday Life -- Adrian McKinty's blog -- and has been recycled with kind permission from Mister McKinty. 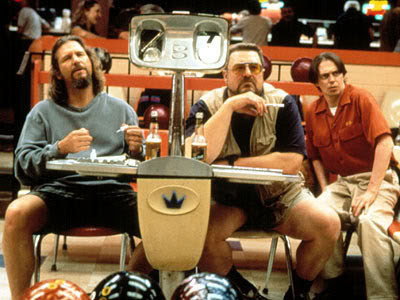 Joel and Ethan Coen have said that the biggest literary influence on their cult stoner movie The Big Lebowski (1998) was Raymond Chandler's The Big Sleep. And from the title and structure of their film you can certainly see what they are talking about. Both works are classic visions of Los Angeles and both films follow similar trajectories: a foil gets involved with a disabled rich man, the rich man's daughter, and a runaway from his family who gets mixed up in pornography. Joel Coen has also said that he was influenced by Robert Altman's 1970's remake of Chandler's The Long Goodbye which gave us a slightly baked version of Marlowe played by Elliot Gould. So the Chandler influences are real and obvious but I want to argue that there's a deeper structure to The Big Lebowski which comes not from Raymond Chandler but from Dashiell Hammett...

Let's backtrack a little first. The Coen Brothers first foray into Hammett country came with Millers Crossing. This is a fairly explicit remake of Hammett's Red Harvest which the Coens apparently became of aware through Kurosawa's version Yojimbo (which later was remade by Sergio Leone as A Fistful of Dollars and again by Walter Hill as Last Man Standing). Miller's Crossing (and Red Harvest and the others) is a classic story of an outsider playing off two rival gangs for his own benefit, however the Coens not only appropriated Dashiell Hammett's plot-line but also his entire argot: "What's the rumpus?" "She's just a twist," "The high hat," "We're not muscle we don't bump guys" etc. The Coens don't seem to have read Hammett as much digested him, absorbing his street talk, his cadences, his slang, his American tough guy voice. (As a wee aside here I actually think their use of "What's the rumpus?" as "hello" in Millers Crossing is a complete misreading of Hammett's use of the phrase in Red Harvest) The Coens of course are suburban college boys with little experience of the actual "streets" but Hammett was a Pinkerton Detective for nearly two decades investigating murders, robberies, insurance frauds with a little union busting thrown in for good measure. The Coens seem to have used Hammett as one of their touchstones for Americana and the more you read him the deeper you see his influence on their work: Blood Simple, Fargo, Miller's Crossing, No Country For Old Men sometimes read like undiscovered Hammett screenplays; but so also do the comedies Raising Arizona and The Big Lebowski. Hammett and humour don't seem to go together but he could be very funny in both his private life and in his books - The Thin Man is as witty as any PG Wodehouse and here's an experiment: try re-reading The Maltese Falcon as a black comedy and you'll get exactly what I'm talking about. Chandler has those great lines about a blonde so beautiful she would make a bishop kick in a window but Hammett has those lines too and a dark, satirical edge as well.

Yes the Coens used The Big Sleep as their skeleton for The Big Lebowski but the irony comes from Hammett: Donny's death, The Nihilists, The Porn King, The Malibu Sheriff - these seem like straight out of Dashiell's playbook not Ray's. The eccentricity and odd digressions are more like Hammett and of course the snap of the dialogue is more authentically Hammettian too. I think subconsciously the Coens knew this and they either gave us a Freudian hint or a deliberate clue late in the film when Jeff Bridges as The Dude encounters a private detective working for Bunny's parents, the Knutsons. "Why are you doing following me?" The Dude asks. The Private Dick played by Joe Polito (who also played one of the rival gang bosses in Miller's Crossing) shrugs and explains: "It was a wandering daughter job." And of course if you know your Hammett you'll recognise that as the opening line of the great Continental Op short story "Fly Paper". The Big Lebowski was a wandering daughter job all right and ultimately the daughter stays lost, an innocent guy dies and the bad guy keeps the money, but what else would you expect in Hammett's bleak, entropic and blackly comic universe?

Ger thanks for coming to the reading all the way from Dumdrum. It was nice to see a friendly face among all the mean spirited hecklers.

Love to some of those photos when you get the chance.

Suste - Thank you, but praise for the piece should go to the author, Adrian McKinty

Ade - T'was great to be there. The photos will be on the blog tomorrow.