How to tell honey from horseshit?

There are three websites I check out every time I switch on the computer – Declan Burke’s ‘Crime Always Pays’, Peter Rozovsky’s ‘Detectives Beyond Borders’, and this one.

And it’s not just because these sites have highlighted my books in an era when papers just aren’t interested. Though if I’m to be strictly honest, that’s how I came across these guys in the first place.

But now, it’s a lot more than that. In the year and a half or so since I discovered crime-writing blogs, I’ve learned more about good writers and good writing from Dec, Peter, and Ger than I did from a lifetime of reading literary supplements.

Dec, for example, put me onto Ken Bruen; Peter opened my eyes to Stieg Larsson (a Swede ffs, who’d a thunk?) and now, Mr Brennan, bless his kung fu-loving heart, has switched me onto the greatest Irish crime-writer of my generation, Adrian McKinty.

Now there’s a bold statement – the greatest? But dammit, there are times you just have to stand up and say it. I have read some very good Irish thriller-writers (and some truly awful ones). But McKinty, I was just stunned by.

And I wasn’t expecting it at all. When I picked up my first McKinty, ‘Hidden River’, about two months ago, I did so with dread. There have been so many complimentary reach-arounds (*copyright Aaron Sorkin) handed out in review circles recently that it has become impossible to gauge true quality anymore, unless you read the books for yourself. And as a consequence, I currently have a stack of bad crime novels in my study, about 20 high, which I started over the past few months and never finished.

But in spite of all this, I thought I’d give McKinty a go because Ger clearly rated him – and Ger, along with Peter and Dec, is one of the few reviewers I still respect. If they have an angle, I don’t see it. And I say that as someone who has spent his life in journalism looking out for angles.

And ‘Hidden River’, thank the stars, was duly brilliant. Pace, dialogue, plot – it had the lot. Couple of caustically insightful Northern Irish touches too, for trainspotters like me.

But was it a one-off? Any chance, Ger, you could send me up a free copy of ‘Fifty Grand’, McKinty’s latest? I’ll pay you back, I lied.

‘Fifty Grand’ arrived, and I devoured it. Finished it in two sittings and let the youngsters take themselves to bed. It was outstanding – international class. All the finest attributes of his first book, with added atmospherics and prose so colourful it bordered on poetry. How the hell could something this good not be in airport bookshops throughout the world?

All of which brings me back to my main point. As a former reviewer, I understand entirely the reluctance to tell the reader when a book stinks.

Writers in particular tend to be sympathetic to other writers. You know the hellish amount of work that goes into a) scripting and re-scripting a 70,000 novel, and then b) getting the shagging thing published. And you don’t want to disrespect anyone who’s got that far.

Plus of course, if you do have a slap, you’re worried about being seen as jealous (big one for published writers this); or you’re worried that you’re actually being jealous and are being unfair (big one for conscientious published writers); or, most importantly of all, you don’t want to get sued. (Stop for a minute and think, when was the last time you saw the line “This book is pure shite” in any review?)

Yes, the central problem with being a reviewer, as I discovered in a past life, is that for all these reasons, you wake up one morning and find you’re praising bad books; books you don’t like and books your readers aren’t going to like either.

But as an author you know exactly how much bad reviews sting, discourage and disillusion. So you can’t do that either.

That’s why sites like this one, Peter’s and Dec’s are vital for the industry. They serve, for me at least, as the last remaining quality control on crime books. They assess, fairly, new work and old. They report, encourage, inform and, where necessary, judge. They have teeth – but they also have the authority of their impartiality.

Ger Brennan and Crime Scene NI have made my summer. I now have seven more McKinty’s to find and read, along with one of Stieg Larsson’s. Most years you’re lucky to find one great author, this year I got two.

I haven’t been this excited since I discovered George V Higgins. 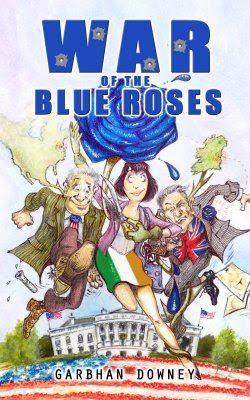 Garbhan Downey’s new comedy-thriller War of the Blue Roses, published by Guildhall Press, is Hughes & Hughes ‘Irish Book of the Month’ for August.

Garbhan, man, what you want to read right now is DEAD I WELL MAY BE. I still think it's his best ...

As for my angle, I'm in it for the money. And free books. And complimentary reacharounds.

I'll second Mr Downey's praise of McKinty and this blog. CSNI has turned me onto the aforementioned Adrian McKinty, Dec Burke, Ken Bruen and Colin Bateman. I'm looking forward to others Ger has championed too, like Stuart Neville. and I daresay there will be a Downey book on my TBR list before long.

I blush to receive such praise, and from a man who wears a suit, yet! But hey, I like McKinty's books too, you know.
==============
Detectives Beyond Borders
“Because Murder Is More Fun Away From Home”
http://detectivesbeyondborders.blogspot.com/

Everybody should listen to Mike. He talks a lot of sense, Just like Mister Downey!

I know this blog is not called Golf Scene NI, but I thought I'd mention that I'm at work now and that I just wrote a headline for a story about Northern Ireland's own Rory McIlroy. Not only that, but the story notes that he's from Holywood, which I've seen, if only from the air.
==============
Detectives Beyond Borders
“Because Murder Is More Fun Away From Home”
http://detectivesbeyondborders.blogspot.com/

Thanks for the shout out Garbhan. I appreciate it brother and I know you what you're talking about, toiling in the mines of anonymity. I've just about given up trying to get noticed in New York or London, or Dublin come to that. I dont have a clue how you're suppose to break through the networks. I suppose you have to live there and got a lot of parties and try to make false friends...sounds ghastly.

Anyway whinge over and thanks for the shout out. I appreciate it, man.

And no, this may not be Golf Scene NI, but I've recently discovered the driving range in a nearby town and discovered I'm not as shite at swinging the club as I thought I'd be. It's a lot of fun too.

Ade - Well, Garbhan's on your side now. The McKinty fan base is growing and growing. You'll be a houshold name soon enough.

Thanks for the tip, Garbhan & Gerard, and I will be buying your books ASAP, Adrian! --Reg Keeland

I quite like the suggestion that you divide your time between chronicling mayhem and working on your backswing.
==============
Detectives Beyond Borders
"Because Murder Is More Fun Away From Home"
http://detectivesbeyondborders.blogspot.com/

Reg - Thanks very much for stopping by! You will NOT be disappointed by Adrian's work.