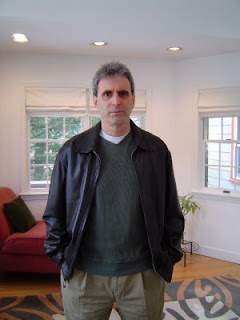 After working for over 20 years as a software engineer, Zeltserman decided to give crime fiction a try. His short stories have been published in many venues, including Alfred Hitchcock's Mystery Magazine and Ellery Queen's Mystery Magazine. His third published novel, Small Crimes, was named by both NPR and the Washington Post as one of the top five crime and mystery novels of 2008. His South Boston Mob saga, Pariah, is out now in the and will be published in the this October, with his latest book, Killer, to follow. Serpent's Tail has recently acquired the rights to his upcoming crime thriller, 28 minutes, with the film option being sold to Constantin Film Development and Impact Pictures with John Tomko (Ocean's 11, Falling Down) and Jeremy Bolt (Resident Evil, Death Race) to produce.

I’ve just finished a high concept thriller titled “Dying Memories”. This one’s got all the requisite ingredients to get me into a larger NY house; an especially nasty government agency developing a drug that will endanger the free world as we know it, and the hero who gets caught up in all this and saves the world after many bruises, bumps, and gunshot wounds along the way. Even has a bloody cat in it! I’m sure I’m going to be hearing from friends who will be accusing me of selling out, but as long as they’re doing it while seeing my book in supermarkets and in Walmarts, fine, I can live with that.

Q2. Can you give us an idea of ’s typical up-to-the-armpits-in-ideas-and-time writing day?

About a year ago I quit working as a software developer and am trying the fulltime life of a writer, so my typical day goes something like this:

4) Hear from my agent that yet another editor at a large NY house was blocked in bringing in one of my books because the consensus was that it was too dark and violent for their readers.

6) Get an earful from the wife about the hole in the wall.

7) Take out the blueboard, replaster, sand and repaint damaged wall.

8) Think about writing some more, but am too tired.

9) Have a few drinks as I contemplate my next day of writing and plastering.

I started studying Kung Fu a while back, and now hold a black belt and am working towards my second degree, so I usually go to at least one class a day, as well as Tai Chi classes. Other than that, boring stuff like fixing holes in walls.

This is a tough one to answer and depends what the writer is trying to accomplish. Be prepared up front that things usually take a long time—the publishing world does not move fast. You need patience and persistence. This is a business where it’s very easy to get discouraged, and the best way to battle that is always be working on something. Worse thing to do is send out something and wait—after you send it out, forget about it and start working on your next project. And listen to what people, like agents, are telling you. Large NY publishers like to play it safe when it comes to crime fiction; every once in a while a true noir book will escape from them, but the sad fact is if you persist (as I’ve done) in writing dark crime fiction, you’ve got a long hard road ahead of you.

This has been more of a retro year for me; been reading Derek Raymond’s fantastic factory series books, and a lot of Donald Westlake—The Ax is just brilliant. Also by Shane Stevens which is about as brutal and great a crime novel as you’re going to find. A few of newer writers I read for the first time this year who impressed me were Phillips (wood), () and Iain Levison (Dog Eat Dog).

Mixed Blood by Roger Smith. Just picked it up today. So far so good.

I’ve written eleven books so far, none of which have taken more than a day or so of research. My next book is going to be the retelling of a classic tale with my own unique spin and perspective, and it’s going to take a ton of research. I’ve got a dozen or so books already stacked up that I need to read, and more will probably be following, but this is a book I’m very excited about writing. So I’m going to be busy with this, as well as keeping my eyes open in case Whitey Bulger ever gets his hands on a copy of Pariah…

I try not to have regrets in life. It’s been a long road to get to where I am now, but on the other hand, I’m writing the types of books I want to write, and I’m with a great house with Serpent’s Tail. So with all my blunders and mistakes along the way, things somehow worked out.

Like a lot of writers, I’ve had more than my share of rejections and close calls, but that’s all part of the game. I’ll share instead my most stressful writing experience. When I first approached (of Serpent's Tail) regarding Small Crimes, he agreed to take a look at it because a couple of their writers, Vicki Hendricks and Ken Bruen, were saying nice things about it, and because the Rara Avis hardboiled/noir community, which we were both members of, were very positively discussing my first book, Fast Lane. But John also warned me up front that there was little chance that they would buy it, that they only buy books that they’re completely desperate to publish. While I thought there was a good chance John would like it, I wasn’t holding out much hope that Serpent’s Tail would buy it, especially since no other publisher yet had been desperate to buy it.

Months passed, a lot of months. I told John ahead of time that I’d be showing Small Crimes to other publishers also, and he was fine with that, and I ended up sending the book to Five Star. The thing with Five Star is they’re a small publisher who basically sells mostly to libraries—their pricing and discount policy doesn’t really allow much else. They’re a professional outfit, a good group of people, but their books are going to sell between 500-1500 copies based on the book’s trade reviews. They ended up accepting Small Crimes, and still no word from Serpent’s Tail. At this point I was leaving it up to my agent back then to contact Serpent’s Tail, and he was telling me they weren’t returning his emails. I pretty much decided if I sold Small Crimes to Five Star, that was it, I’d get the book in print, and then quit writing for good. It just wasn’t worth it anymore. I pushed things out as long as I could, then signed the contracts and sent them back to Five Star. Three days later called me to tell me how much he and the publisher loved Small Crimes and that they wanted to publish it. After that I was scrambling to work something out with Five Star.

The next few weeks were tough ones, sweated off several pounds, but fortunately the Five Star folks turned out to be really decent people, and they let me exchange Bad Thoughts for Small Crimes, and the rest is history.

What cracking answers! Very inspirational and eye-opening too.

I wonder if the holes in the walls are deeper now Dave's a black belt.

Mike - It is a brilliant set of answers, isn't it?

I'd say he's definitely using more Polyfil than he used to.

Great interview Gerard. Dave is awesome! He's easily one of the most approachable novelists out there and has more war stories about writing and publishing. It's great to see him succeeding after so many years of struggle. He's proof persistence truly pays off in the long term.

Keith - You're right, Dave is one cool cat. I very much enjoyed the email exchange that came from this interview, especially when the topic turned to kung fu. Writing and martial arts? You don't get conversations like that too often.