That Burke Fellah Fairly Gets About 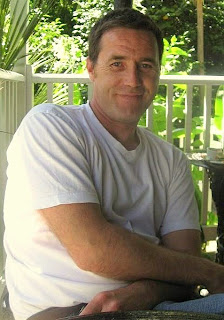 So, this must officially be Declan Burke week as it seems as if the entire blogosphere is counting the hours to the US release of The Big O.

Dec started out the week by hosting Barbara Fister's Carnival of the Criminal Minds on Monday. He put together a characteristically well thought out and nicely presented piece on the merits of a crime fiction blog.

Next up, the revelation that he'll be guest blogging over at The Rap Sheet for the entire week. And the first post is again well thought out and nicely presented. This one attempts to wrestle with the whys and what fors of the success Ireland has enjoyed in the realm of crime fiction. So, we'll have to stay tuned there.

I figure, I should think well and nicely present a post based on a bit of a coincidence I experienced earlier, related to The Big O. Coincidence, after all, is pretty much the book's central theme.

I'm reading Peter Leonard's Quiver right now. This, of course, got me thinking about his papa, Elmore Leonard. I've been meaning to bone up on the guy for a while now and chow down on some of his books. And for a very long time, I've managed to miss Get Shorty and Be Cool every time they've played on the telly. I want to see them, but it just hasn't happened yet.

So, anyway. I'm on wikipedia, reading about the big E when I notice that a new film based on one of his books is hitting the theatre in November 08. Cool, yeah? Well, dig this. The book it's based on is only Killshot. Where's the coincidence? Check out these covers.