A Wee Review - A Gonzo Noir by Declan Burke 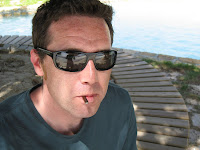 Declan Burke recently threw his hat into the self-publishing ring. His offering? An internet novel by the name of A Gonzo Noir. The first instalment was featured on his excellent blog, Crime Always Pays, on the 29th of May 2008 and the final part made its way onto the dedicated A Gonzo Noir blog on the 21st of July 2008. The novel instalments were posted regularly, and Burke’s aim was to have the finished product floating about the blogosphere within three months. He shaved a month off his timetable, and for that I’m thankful, because I couldn’t get enough of it and was dying to get to the end.

Not long after I read the first, and highly polished instalment, I emailed Declan Burke and asked him why he would give away a novel length manuscript for free. His answer was unarguable. “Why Not?” he said. “Fair enough, then,” said I. But he also put together a post on his blog detailing his reasons, which centre on the “Why not?” premise, but may bring more satisfaction to the more inquisitive among us.

The plot is a very interesting one. Not a straight crime story by a long shot. Burke has mixed biography, crime and speculative fiction to create a genre-sprawling novel that defies classification. The novel opens with a disgruntled character from one of Burke’s ‘trunk manuscripts’ paying a visit to the author to demand he be released from the limbo that is the unpublished story. Burke protests that he is done with the story and has other things on his mind, such as his new family and the impending Harcourt deadline for the sequel to his novel, The Big O. The character, once known as Karlsson, has decided to call himself Billy, revamp his appearance and outlook on life, and has brought new plot suggestions to add a real kick to a dead story. Some highly explosive suggestions!

At the outset, this novel fascinated me because it came across as an experiment in redrafting. As a writer, I have an innate interest in the processes of other writers, and so this idea struck a chord. But a couple of instalments in, it became less about my curiosity in the workings of Burke’s redraft and all about the story he was telling.

Take Billy, the novel’s central character. At times he’s a sleekit wee weasel who makes your lip curl, and at others he’s a likeable and witty bloke you wouldn’t mind having a pint with. He’s the king of twisted rants and deeply cynical thought and I found myself a little freaked out by the amount of times I nodded along with his insane beliefs and suggestions. That might say more about me than Billy, but I think it also says a lot about Burke’s ability to create a three dimensional character and make him wholly appealing and unappealing in equal measures.

The style is very interesting too. First person point of view is shared by Billy and Declan throughout, with the lion’s share going to Billy. At first I worried that this might become confusing, but Burke’s ability allayed this small anxiety. He made all the POV switches very clear and ensured that confusion didn’t interfere with my enjoyment.

My only criticism is in the physical form A Gonzo Noir takes. Usually, I wouldn’t read anything longer than a blog post or short story off the computer screen. I’m a bibliophile and always will be. I refuse to believe the eBook is the wave of the future. Give me hardcopy every time! However, A Gonzo Noir spits in the eye of this criticism, because it’s the first novel length work I’ve ever read online. A pretty good recommendation in itself. Still, if this thing ever makes it as a printed publication, I’ll be first in line to spend my hard earned beer-tokens on it.

So all in all, A Gonzo Noir is a slightly psychedelic trip into the workings of Declan Burke’s rather odd mind. The characters leap off the screen and the ending twists again and again with more enthusiasm than Chubby Checker and the Fat Boys ever mustered. I’d tell you to run out and buy it now, but you don’t even have to do that. It’s blummin’ free! So get on over to the blog hosting A Gonzo Noir before the author catches on and holds it to ransom.

I'll say it again, I loved it. Slick, fast and funny - that's my four word review.

Free books on the web though? Dangerous precedent. How are we going to make the punters give over their hard earned moolah? Fancy covers? Scratch and sniff pages? No one's gonna want that in a crime book. Maybe a romance though, I'll look into that.

Anyway good on you Dec and you too Ger for another excellent non spoiler review. Dont know how you do it.

(Excellent IV avec Lucy too. I have a feeling we're all going to be asking her for blurbs in about two years. Blubs or a job)

Adrian - A fair review, indeed. Certainly gets to the point a lot quicker than mine does!

Scratch and sniff romance? I'm trying to come up with a clean comment on that, but I just can't. Best say nothing at all.

Cheers for taking the time!

And yeah, I reckon Lucy is a writer on the up and up and up! And I'm slowly coming to terms with my jealousy.

"So all in all, A Gonzo Noir is a slightly psychedelic trip into the workings of Declan Burke’s rather odd mind."

But Mr Ambassador, with these kind words you are spoiling us ... Cheers, Dec