Back to the Future: Why I wrote a Slasher Horror Book

When I was a lad, growing up in Portadown, there wasn’t much to do on a Friday night that didn’t involve getting into bother. Usually, we’d just hit the local video shop. We’d make straight for the horror section, scan the shelves for the goriest looking, most outrageous cover we could find and take it to the counter. Now, this was the late 80s. A different time, if you like. A twelve year old kid looking to rent a Certificate 18 film meant nothing back then. As long as you had your da’s card, you were good to go.

We watched a lot of horror. All the Fridays and Nightmares and Halloweens. A fair bit of really bad, low-budget stuff that we probably didn’t make it all the way through (although, we’d try our damndest: there was a charge if you left a video back without rewinding it first. Chances were, if you ejected that bad boy in a fit of rage halfway through, you weren’t going to remember to rewind it later).

Thing is, watching those movies shaped me into the man I am today. It got me into horror which got me into writing which is now something of a career. Later in life, I would revisit some of those titles, and many more like them that I missed along the way, and it would become something of an obsession. Video shops were on their way out by then so I’d be hitting HMV and Amazon and whatever second hand shops I ran into, and I’d lap up whatever 70s and 80s horror I could find. Somewhere along the way, I heard about Giallo, the work of guys like Dario Argento, and the net was cast even wider.

I became just as obsessed with slasher horror as I had been with zombies ten years or so prior.

Soon, the cogs within the ol’ creative brain began turning. An idea started to form and I grabbed a pen, jotted some stuff down. Meanwhile, I was chatting with old friend and fellow horror hack, Andre Duza, and shared some of my ideas with him. Before long, we were working on the project together. Maybe I asked him to weigh in on it or maybe it just happened: we’re talking slasher horror, here, so the urban myth may have replaced the actual truth in my brain. One thing’s for sure, once Andre became involved, we really started to motor. The characters, the setting, the story: it all came alive to us and much of it echoed those old movies that I would watch back in the 80s in Portadown and Andre was watching at the same time over in Philadelphia.

Voodoo Child was born on Halloween 2015. It’s been described as 'the literary equivalent of the classic horror films of the 80s' by Harry Manfredini, who scored some of those films that inspired me so much back in the day. And hell, Steve Johnson who did the special effects in those movies; the kind of stuff that had us fist pumping the air or recoiling in disgust as kids; had equally nice things to say on the book, too.

Which, in a really cool way, brings us full circle.

So, why did I write a slasher horror book? Because I had to. I’ve always described myself as being in this somewhat sordid business of writing because I’m a fan. I’m a fan of zombie horror so I wrote four zombie horror books. I’m a fan of crime and noir so I wrote The Girl in the Basement. I love Ridley Scott’s Blade Runner so I wrote my own tech noir, Plastic Jesus. Voodoo Child is my love letter to the slasher horror genre. To John Carpenter and Dario Argento and all the rest of those guys that rocked my world back in the 80s, and still rock it today. 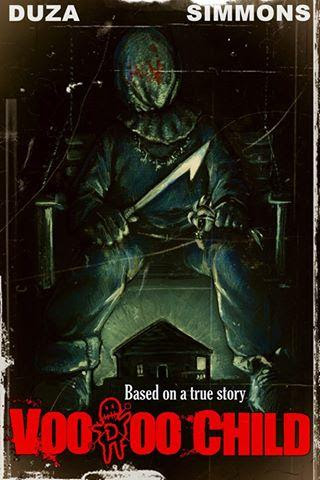 Stay away from Blackwater, Louisiana. Behind the smiles and the southern hospitality lies a dark secret.

Don't go in the woods. They're haunted.

Don't go in the lake. There's a dead witch beneath those waters.

Lori Sawyer was raised in these parts. The biracial descendant of a Voodoo Priestess, she's known as "witchy girl" to her friends, Abby and Roxy. But to Lori, Blackwater is a sacred place, a crossroads of old southern, African, and French spirituality to be celebrated, not feared. In fact, it's just the sort of environment to help free Abby from the memory of witnessing her boyfriend's murder.

And from the guilt of having killed him.

In 1985 three friends will embark on a weekend getaway that will change their lives forever.

"Duza and Simmons have succeeded WILDLY in re-creating a classic horror flick from the '80s - on the page! And if anyone knows about '80s horror... it's me." Steve Johnson (Special FX Legend: THE HOWLING, AN AMERICAN WEREWOLF IN LONDON, GHOSTBUSTERS)  Buy it Now from only £1.99:
Amazon UK/ Amazon US
Signed paperback available from Infected Books store from only £7.99 (incl UK postage):
Go to Infected Books Store

Thanks, Wayne. The very best reason to write in any genre is that you love the genre. Anything else is just cynical calculation.

Agreed! Thanks for reading, Seana :)