Desmond J. Doherty was born in Derry and is a solicitor in his own law firm. He has extensive civil and criminal law experience. Over the years he has been involved in a number of high-profile inquests which include the Dublin and Monaghan bombing and the Omagh bombings. He has experience in various courts and tribunals including the Special Tribunal for the Lebanon and the International Criminal Curt for the former Yugoslavia.

‘Deadlight’ is the third in the Valberg trilogy.

Gerard: It’s well known that Scandinavian crime fiction has been popular for some time. You’re the only CSNI regular who has a foot in the Northern Ireland and Sweden via your main character, Detective Valberg. Is it safe to assume you’ve been influenced by the likes of Stieg Larsson?

Desmond: 'Is it safe?' Very safe. For sure. Henning Mankell before Stieg Larsson and now of course the great Norwegian, Jo Nesbo. But the deeper you dig and the further you go into Nordic Noir the list and talent of all those fantastic authors is endless. Valberg has been described as someone from Nordic Ireland! We are so close to Scandinavia. How could any crime writer not be influenced by our Scandinavian neighbours who have great PR. While the Nordic authors expose the deep divisions in their society, the divisions that we have lived with and grown up with here make for fantastic dark and violent crime fiction.

Gerard: So, as the photographic evidence suggests, you’ve been to Norway recently. And you met Mr Larsson’s widow. Would you consider that a high point in your career?

Desmond: The high point went even higher after Eva asked me to sign all three Valberg novels for her. She was delighted to be the first person to receive the third Valberg novel. We were on a panel together for a group of mainly Norwegian lawyers dealing with Human Rights and the rights of authors dead and alive. Eva's position is outrageous. Under Swedish law she has been treated appallingly and we all should support and stand by her. Hearing how Stieg's three novels came about and his writing process was bewildering. I never thought I'd be in such a privileged position to be with Eva and personally speak about and ask about Stieg's work. I hope to get Eva to Nordic Ireland next year.

Gerard: Valberg’s career as a PSNI detective has more highs than lows. Do you consider him to be a true representation of a cop from Northern Ireland?

Desmond: Remember, when he does go low it's very low. Sometimes I feel I won't get him back. He's more of an eclectic mix of lawyers and police officers I've come across over many years of experience here and elsewhere. He's not based on any one individual I know. I think his scorn for procedural propriety in this day and age of form filling and pettifoggery would mean that he wouldn't survive long in the PSNI. He's a fictional representation of a police officer from here. I think his emotions and feelings are true to all of us however. Fans of the books say, 'He's some boy...isn't he.' Every time I hear that I pause as I wonder are they being complimentary to Valberg or O'Driscoll. Some of the readers like both of them.

Gerard: Part three of your series is clearly the most high-octane to date. Anybody who’s read the first two will know that says quite a lot. Do you think the series has a definite end in sight or do you plan to torture your poor characters for a few more years?

Desmond: I wanted to move and develop the characters with time. Valberg moves on and so do the police officers and lawyers around him. Therefore the story moves on too. Deadlight for me was high-octane with emotion, as well as action. I had a plan all completed but I really just followed my gut with the story.'Emotional content. Not anger.' I wanted to bring the O'Driscoll affair to some sort of conclusion. That was always the desire. But I found it hard to let the main characters go as they have so much to say and develop. I wasn't under any pressure to write a fourth in the series but I couldn't stop writing when I finished Deadlight, so continued.

Gerard: If not Valberg, who else?

Desmond: Amanda Cleary-the Derry Journal journalist. I really like her. She is the one character who everyone trusts and who comes out of the whole debacle with her integrity and dignity intact. On the other hand the lawyer who sleeps with her eyes open,  Miss Maguire, has a series of her own in my head. She is wild and beguiling. Yes. Lets have more of her. I've written a short story in a collection I'm working on called, 'Inquest.' It's all about Constable Michael Bell and what happens to him on his first day in CID. He's just one of the characters that I'd like to take further. As for Jon Valberg, he has good and bad days. A lot of dark and not much light but his gallows humour allows him to survive. That is a very Irish and Scandinavian trait. 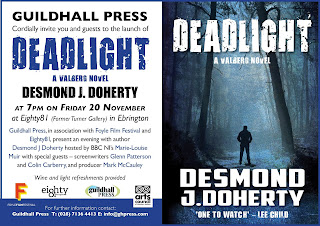 Desmond J. Doherty is published by Guildhall Press. Check out their website for more information on where to buy his books.