Tales from the Sweety Bottle - The Mexican 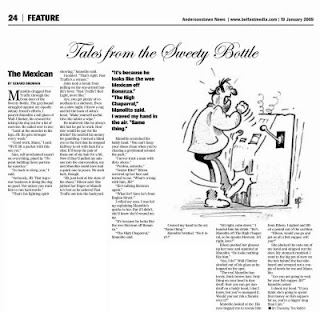 Click the above image to read. This is the fourth of a six-part series of stories based on Brennan family anecdotes. The Sweety Bottle was a Lower Falls shebeen ran by my grandfather in the seventies. The Mexican first appeared in the Andersonstown News on Monday 19th January 2009.
Copyright ⓒ Gerard Brennan 2009

Heh, pretty funny and no doubt authentic. Any feedback from Andytown News readers at all?

Mike - Cheers. Wish I'd been around to drink in The Sweety Bottle in its heyday, but sure...

I'm only getting feedback via my family at the minute. People who wouldn't recognise me, but have stopped my da to chat about them. It's been all good so far. Nothing from the paper itself, but then, I haven't asked either. In the latest edition (out in print today), they've included my web address at the bottom of the features. Maybe I'll hear something that way.

As Marco pointed out, it is very odd that we were talking about High Chapparal over on Adrian's Cormac McCarthy post at just about the same time you put this up.

I had no idea that High Chapparal was so popular in Northern Ireland. Not to mention Sweden.

Seana - Thanks for pointing that out. I've been too busy this week to keep up with the runaway comments on Adrian's blog. That is weird, isn't it? If I call "jinx" do you have to buy me a coke or something?

I should be working on my screenplay, not watching Swedes dance! Fun though.

Jinx. Although, I think it's not a Coke but a Wall Climber you have to buy me. Even if I am a bit afraid of the very idea of one of those...with or without mice in them.

Back to your screenplay!

Seana - A Wall-Climber it is.

A couple of hours trying to rescue my screenplay from yesterday's fruitless labour, and I'll be needing one myself.

Cheers, then. I bet today will, or maybe already as gone better.

Seana - It's getting there. And the night is young! Thanks.

gerard, love the sweety bottle stories in the a'town and would love to know where and when your play will be on. Especially keen to know who will be playing Manolito, as he was my daddys brother and my special wee uncle and friend.

Susan - Thanks so much for stopping by to leave a comment.

Unfortunately, the play hasn't been picked up just yet. There's still hope, though. A West Belfast theatre company has shown an interest off the back of the A'town News series, so fingers crossed it'll play somewhere in Belfast soon.