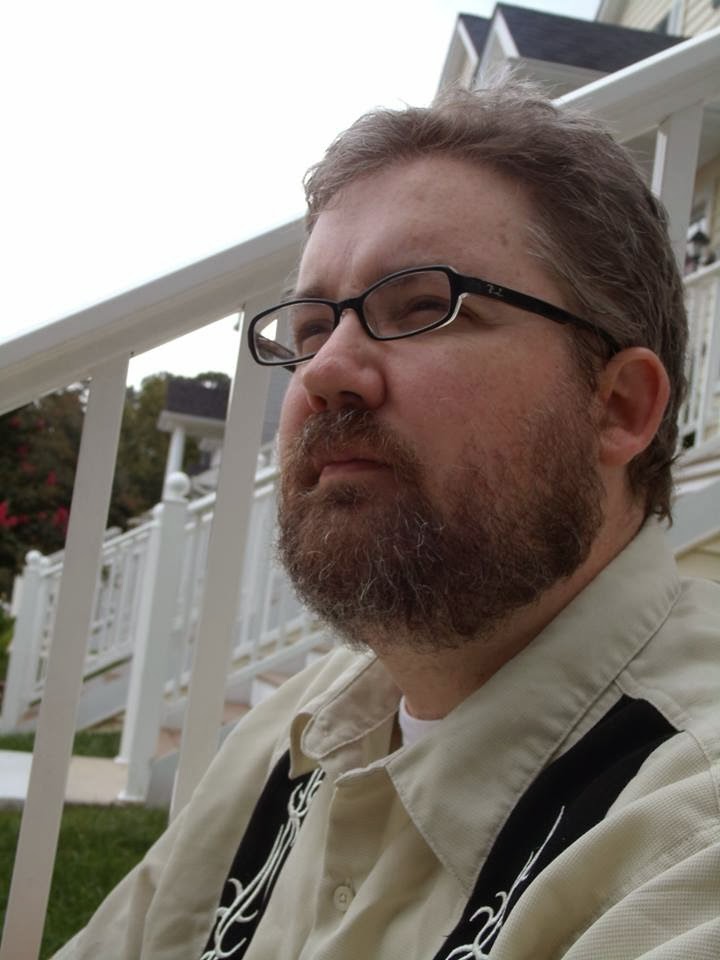 What attracted you to Fight Card MMA?

I like boxing and have watched it for decades, but my interest in it had cooled over the last ten years in favor of MMA, which I find to be a deeper and more technical combat sport. MMA also continues to evolve and improve as the years pass, which makes watching it an exciting prospect because you never know exactly what you’re going to get and at what level.

Whatever the case, I had already read several Fight Card releases in their main line (the one set in the ‘50s), because in addition to being a fight fan I’m also a student of pulp fiction, especially Robert E. Howard. For those who don’t know, Howard was a prolific sports-pulp writer and was well known for his boxing stories. Fight Card’s traditional boxing tales hew very closely to the Howard model, though I notice less humor in them. They make for entertaining reads, but I didn’t feel as though the period setting was right for me.

In December of 2012, Paul Bishop — one of two men, including Mel Odom, who started the Fight Card line — posted a mockup cover of an MMA release that showed a woman in mid-punch, along with the title Rosie the Ripper. MMA, as I mentioned, was a growing interest of mine and I found myself particularly intrigued by women’s MMA, where some intense and creative fighting was going on. Immediately I thought this could be something I could do, but I had no instantaneous ideas and it was almost a year later when I came up with something and shared it with Paul, who went for it. I have a long (possibly boring) version of this story on my blog.

Have you got any fight experience?

The short answer is no. I trained in boxing when I was in my mid-20s, but never even progressed to the point where I was safe to spar with other students. I found it a gratifying experience, but it costs money to train and I’ve never been exactly flush with cash. Consequently I have never gone back, even though there are a couple of excellent boxing and MMA gyms near my home.

Other than watching MMA, did you need to do any more research for the fight scenes?

Watching and reading are the biggies. Not just televised fights, but training videos on YouTube and all the other wealth of things available to those interested in the sport. A particularly helpful book is Mixed Martial Arts for Dummies, by Frank Shamrock. It may seem like it’s too basic for those who know MMA, but the step-by-step instruction and explication of the thought behind the techniques provides great value for a writer seeking authenticity. Which is to be expected, seeing as how it comes from Shamrock, one of the greats.

Who is your favourite MMA fighter (you can have more than one)?

As I say, WMMA is my thing, but I am going to shock a lot of people when I tell them Ronda Rousey is not my favorite fighter. Sure, she has great mat skills, but she seems like an awful human being and I like the fighters I follow to be decent people as well as athletes. Miesha Tate, who is one of my favorites, may not have the skill-set to be a champion anymore, but she’s generous to her fans, supportive of other athletes and generally a nice person.

I follow a few WMMA fighters online and have interacted with some of them. Fighters like Bec Hyatt, Cassie Robb, Michelle Waterson, Raquel Pennington and Roxanne Modaferri. Most of them aren’t stars, but they come to the sport the way I prefer fighters to come to the sport, and so they get my support.

On the male side of the equation, I have great respect for Johny Hendricks, who I think really ought to be the UFC Welterweight Champion right now. I’m also impressed with Travis Browne, who’s a real monster in the cage.

During a recent visit to No Alibis, David Torrans told me he'd love to have you over for an event. You tempted? Maybe for your next Serpent's Tail release?


Given that the majority of my fanbase, if such a modest audience can be called a fanbase, is in the UK and Ireland, I would absolutely love to cross the pond and meet everyone. When The Dead Women of Juárez was shortlisted for the Crime Writers Association John Creasy New Blood Dagger, and it looked as though I might win, Serpent’s Tail intimated that they’d fly me over, but obviously I didn’t win and that never materialized. I do have a passport, though, and I’m prepared to use it at a moment’s notice.

Thank you, Sam Hawken!
Posted by Gerard Brennan at 09:15