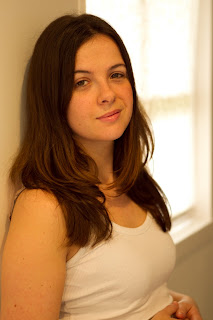 Claire McGowan was born in Rostrevor, Co. Down. After a degree in English and French from Oxford University she moved to London and worked in the charity sector. She is currently the Director of the Crime Writers’ Association. THE FALL is her first novel and is published by Headline on 2 February.

I’m working on a re-write of my second book for Headline, which is due out in 2013. Publishing schedules often run very far in advance! When I have time I’m dabbling with other book ideas for the future. Having the ideas is fine, it’s just finding the time to write/edit/polish them that’s the problem for me.

Can you give us an idea of Claire McGowan’s typical up-to-the-armpits-in-ideas-and-time writing day?

As well as writing I have a part-time job running the Crime Writers’ Association. So I work from home full-time now, and it’s up to me to set the routine. I have to say that, having always been quite disciplined, I’ve been disappointed by how difficult I’ve found it working from home. At the moment I’m trying to do it like this: some time for emails in the morning, plus internet faffing (a full-time job in itself if you let it be), several hours of writing, then a few hours of CWA work. I have a puppy so taking him out for walks/stopping him from eating important things also gives me a good break from the laptop.

I don’t understand the question? In all seriousness, it’s tempting when you work from home to always be working in some capacity, often without actually being all that productive. For a break I read a lot – I’m trying to read more as I think it’s essential if you’re going to write – and I walk the dog, and I also watch a lot of films. I realise this is making me sound really boring so I’m going say that, as befits an Irish crime writer, I go out a fair bit too. As part of my job I quite often go to crime-writing parties and events – those people know how to have a good time!

I’d say congratulations on identifying your work as part of a genre. So many first-time writers seem to have no idea that genre even exists, and instead are trying to shoe-horn their work into the nebulous general-literary-mainstream fiction area. If you use it properly, genre can be hugely valuable to your work and you career. Think of it as a ladder, not a frame – you don’t have to be bound by the rules, but it can help you get where you need to go.

In 2011, as part of my job, I read a very wide spectrum of crime, from noir to action to fantasy crossover. My personal favourite has always been the psychological thriller, in the vein of Barbara Vine, and so I probably most enjoyed books by Sophie Hannah, Erin Kelly, Julia Crouch, and Kate Atkinson. All women, for some reason.

I just finished reading A Clash of Kings, the second in the ‘Game of Thrones’ books. It was brilliant but I’m feeling quite daunted at the thought of another five 900-page tomes full of intrigue and twists. I might need a rest or else I’ll start stomping round in cloaks and commanding my dog to tear out people’s throats.

Looking ahead, I’d love to write some crime set in Northern Ireland. It’s so exciting to see writers emerging from back home and I’ve already drafted up the first in what I hope would be a series. I once read something Ian Rankin wrote, where he said that compared to Scotland, there was very little Northern Irish crime, perhaps because we were too busy dealing with the real-life effects of violence. But it seems now that Irish crime is having a real moment, and I’m keen to be part of that. Northern Ireland’s such a rich setting for a crime writer. There’s so much dark history, both related to the Troubles and otherwise, but coupled with humour and a strong culture.

Without wishing to boast, I was comparatively young when I got my publishing deal, so I don’t have too many regrets so far. Even so I feel like I wasted several years before knuckling down to writing. It was what I’d always wanted to do, but I never really tried because I was so sure I’d fail. It’s unlikely I would have got published any earlier, but I could have spent a lot of time writing instead of watching Friends repeats. My advice to anyone who wants to write would be to get on with it and not worry about failing. And don’t listen to your parents when they want you to do a law degree.

It’s not been THAT bad, I suppose, but I’ve found the second book more difficult than I expected. Maybe because I wrote the first in happy ignorance of how publishing worked, or that it was a crime novel, or of pretty much everything. Now I’m doing it professionally I’m putting myself under more pressure and worrying a lot more. But hopefully it will have paid off in the end.

As a native of County Down (Rostrevor), it’s great to be interviewed by someone local!

Calling you book The Fall is a lways a way to get me interested!