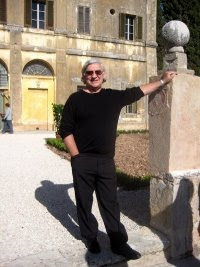 I am just about to embark on a companion novella to my THE STATE OF MONTANA, published many years ago, which went into several foreign editions and sold film rights, so about time to follow up on it. My last novel, the first in 4 years, I WAS WAITING FOR YOU, was completed in December and appears 1st November 2010 from Accent Press.

Q2. Can you give us an idea of Maxim Jakubowski’s typical up-to-the-armpits-in-ideas-and-time writing day?

I'm an early riser, and tend to do all my writing end editing work in the morning between 7 am and midday. Afternoons are usually devoted to reading and movies.

Just write and don't talk about it.

The new Toby Litt and Scott Turow novels, and a book by Noah Boyd (alias Paul Levine), but am way behind on crime, as have been reading a lot of stuff outside the genre recently.

About to begin Justin Cronin's THE PASSAGE.

Everything and nothing, depending on my mood and the day

I wrote a novel THE PHOSPHORUS WAR, which sold to 3 publishers and they all went under and the book was never published. Although I still have a set of galleys. Maybe a good thing, in retrospect as it's not very good and much too episodic (but then a lot of my stuff is...). But it held my confidence and career back for at least 5 years.

No. At least you didn't ask unanswerable questions... And I know of several.

Labels: An Interview, Maxim Jakubowski, Requiems for the Departed