An Introduction to BOG MAN by JOHN MCALLISTER

When the editors of Requiems for the Departed asked me to write a story for the anthology, an image of a bogman immediately clicked into my head. And that’s where it stayed for month after month until near the deadline.

All I had to go on was the fact that bogmen were either the victims of murder, or sacrificial victims. Then memories came to me: a story I read years ago about pre-history life around Stonehenge, where the Druid chose as that year’s offering a woman, who had annoyed him; a lone hill near Coalisland, in County Tyrone rising out of the bogs; and the seeming chance that some bog roads are maintained as important county roads and others abandoned to nature.

I don’t particularly believe in ghosts and things that go bump in the night, but I do have experience of something out there, of portents and signs, so I buy into the crows and the old washerwoman foretelling the death of Cúchulainn, which I have used in my story.

The rest came from two evenings spent turf cutting as a child and the feel of freedom that open spaces give me.

The story also allows me to make a belated apology by dedicating this story to Sorley O’Dornan. On the way to the bog, riding on the bar of his bike, I managed to poke my foot between the spokes. We cartwheeled into the — luckily dry — ditch. 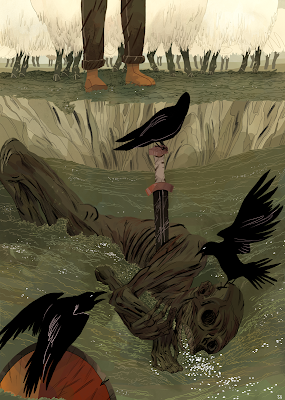 Requiems for the Departed can now be pre-ordered on the Morrigan Books website.

"Bog Man" makes flesh and blood out of those ghosts. Terrific story!
================
Detectives Beyond Borders
"Because Murder Is More Fun Away From Home"
http://detectivesbeyondborders.blogspot.com/

"Bog Men" is an awesome title.

And that's one cool image!

I saw some bog people at the National Museum of Ireland in Dublin. They looked as if they might have something on their minds. It would be quite an experience to sit by them while reading this story.
==========================
Detectives Beyond Borders
"Because Murder Is More Fun Away From Home"
http://www.detectivesbeyondborders.blogspot.com/

"Requiems for the Departed" is now listed on Goodreads.

Members may like to add it to their "to-read" lists.

Ireland is full of mysterious places and the book should prove very popular.

I tried to send you an email as you asked on my blog, but I couldn't make either link work for some reason. Please advise. You can email me at seana (at)cruzio.com if you like.

Its a great story.

Although when I was a student I remember saying "can you off the bloody bog, man, I'm bustin."

I think it's just as well that John wrote this story...