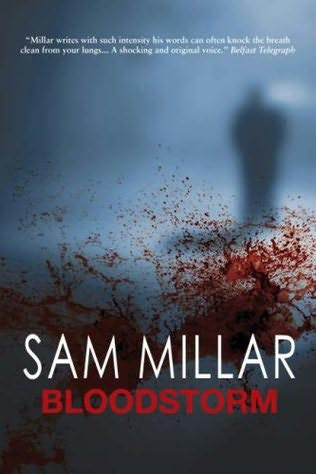 Saturday brought good news for Sam Millar in the form of much lauding. The Belfast Telegraph (or Belly Telly in some quarters) did a top-ten-reads-in-2008 piece. Millar’s Bloodstorm took the top spot. To put this in perspective, he beat Maeve Binchy and Frank McCourt to get there.

Meanwhile, I’ve been thinking about my own top ten for 2008. Declan Burke over at Crime Always Pays beat me to the punch last week. John McFetridge did well there, didn’t he? Note to self; hurry the hell up and read his books. I’ve started reading his meta-fiction series on his Bouchercon road trip with Dec Burke to tide me over. It’s a lot of fun.

Also, Adrian McKinty posted Stephen King’s top ten albums for 2008, which is a bit of a cop-out if you ask me (sorry, Ade, going for that controversy thing). However, since a precedent has been set, I’ll give myself a bit of a cop-out top ten. You see, I’ve read a lot of great books this year, and it’d take ages to judge my best reads of 2008. And I don't have that kind of time. So, here’s a list of my favourite CSNI interviews – and it’s a baker’s dozen, rather than a top ten:

Honourable mention to Sam Millar for being the first CSNI interviewee. And the circle is complete.

Adrian - I like that. And I think I'll print it off and make it my mission to sample a pint (or six) of each in 2009. So far from your list, I've tried Guinness, but not in the Joymount Arms.

You did drink all these beers in 2008?
It must have cost you a fortune-most aren't distributed in the U.S. or Australia,right?
And how did you grab the Westvleterens?
Through the black market?

If I tell you will you blab it all over, or will you keep it quiet? (just the readers of Ger's blog) You have a worrying social conscience at times, mate.

You should be able to get Black Sheep, Theakston, Sam Smith, Chimay pretty easily.

Thats not to say that you dont have thousands of readers. Of course you do. I meant "relatively" quiet.

I would gag my vociferous social conscience for once.
And I wouldn't want to set the Westvleteren monks, scary motherfuckers as they are,on your trail:Michael Forsythe was lucky he only had to deal with Irish hoods,IRA terrorists and Peruvian gangsters.

Ok, I'm trusting you here. Westies can be got from these people. Please dont mention my name or tell too many other people.

I know for a fact that the monks hate this and I'm not sure if its 100 percent legal, but in small numbers I cant see that its that harmful.

Colman - I want to argue with you over Keane, but this year and that beard... He's given you too much ammo.

Adrian - Cool link. Thanks. They came for the books and stayed for the beer.

Ger > thats twice he has chucked the towel in.I am still a bit peeved that the Republic had him back after he threw his toys out in 2002

Colman - Keane's behaviour in 02 split the Country's opinion in half. I sided with those who gave him the benefit of the doubt and saw it as striving to do better and frustration at a team that didn't share his passion. This time, I don't think it's such an even split. I've lost interest in the subject at this point, but I'm leaning towards your opinion now.

And one for good luck.