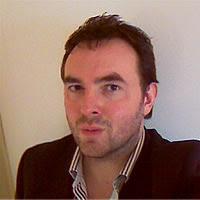 Josephine Damian left an enthusiastic and ecstatic comment in my previous post. Since it relates to breaking news, and she puts it all so eloquently, I've decided to post it all in her words. To you, Josephine.

Stuart Neville, (pictured above) my Prince of Darkness, and the writer formerly known as "Conduit," has landed an agent - and not just any agent - but literary powerhouse and legend, Nat Sobel.

Oh, Nat also loves him some cats. My kind of guy.

And how did Stuart get on the Uber agent’s radar? I’m going to steal a bit of Stuart’s thunder and reveal to my blog peeps that Mr. Sobel scouted him on the Internet. That’s right – a big name agent was scouring the online crime magazines and plucked our man from obscurity. (of course I’ve been singing Stuart’s praises loud and clear since last fall when I first read his work in Agent Nathan’s Bransford’s writing contest). To those of you that don’t believe agents are poking around the world wide web looking for The Next Big Thing – here’s your proof. Here. Is. Your. Proof.

So do stop by and give a big shout out to the literary world’s best and brightest rising star!

Having already read Stuarts’s manuscript (it already holds the distinction of being only one of four books I liked well enough to finish this year) GHOSTS OF BELFAST, I can tell you it’s nothing by clover ahead for this blessed son of Northern Ireland.

So there you have it folks. More talent from these six counties. I guess we'll be hearing more from this Neville character, eh?

Thanks for the tip, Josephine, and best of luck in your career, Stuart Neville!

Blimey, I'm all over the bloody place today! Thanks for the shout out. :)

Whoa, hats off to Stuart Neville! It reads like something out of a Hollywood script.

Stuart - a pleasure to report such good news. Look forward to hearing more from you.

Mike - yeah, he's a lucky bastard, isn't he? Not that I'm jealous or anything...

He's a lucky bastard, isn't he? Not that I'm jealous or anything...

It reads like something out of a Hollywood script.

Gerard: Thanks for the two-fisted shout out for both Stuart and me.

No worries, Josephine. Any more news, send it my way.