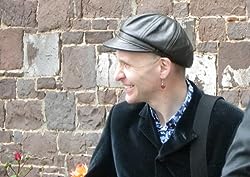 His work has appeared in a number of prestigious magazines and collections, including 2 editions of The Best Of British Crime,The Reader, Crimespree and Needle.

He lives on the East Coast of Scotland in Dunbar (Sunny Dunny) with his wife and three children.

As well as writing fiction, he has been a teacher for twenty-five years and has worked in a number of mainstream and special schools.

Gerard: You've named the chapters after songs. Is this the unofficial soundtrack or simply the best title for each chapter?

Nigel: For Jesse Garon and his father, music is hugely important in their lives. They are lovers of the rock and roll of the 1950s in general and Elvis Presley in particular. This passion provides just about the only glue their relationship has. For Jesse it goes further in the sense that it gives his outsider status in the community an identity. He’s a modern day rockabilly rebel in a place and time that have forgotten about the king and about rebellion. Using song titles as chapter headings came as a natural extension of that. Essentially it became something of a game. I had a piece of writing in front of me and had to find a track to match it, which meant I had hours of fun working through my records and CDs and got to listen to some mighty fine songs while I was working. I also finally discovered that You Tube has a purpose.

Gerard: Well, one of those chapters, 'Suspicious Minds', contains an observation, one of many, that made this book stand out for me. The subject of the observation is Jesse's social worker, Wallace. If you don't mind, I'll quote it here:

"Swearing was another one of those things people like Wallace could get away with. Like using words like damned and buggered made him an all right guy. Just like the people he was sent to work with except for the job, the clothes, the posh accent and the lifetime of opportunities."

Nigel: Oh yes. And he has every right to be. The violence and neglect that he has experienced at home has been overwhelming. Worse, the system that purports to save him when things get really heavy is just as bad in a different way. He’s young, but he already knows a huge amount about injustice. What I like about him is the way he doesn’t let it extinguish all his hope. Instead, he allows his love of music to carry him forward with a glimmer of optimism as a guiding light.

As an aside, there were some amazing figures published very recently about the proportion of children who have been in care who end up in prison. It’s ridiculously high and points to the need for a major reform in the way we operate.

Here’s a quote from The Who Cares Trust:

‘23% of the adult prison population has been in care and almost 40% of prisoners under 21 were in care as children (only 2% of the general population spend time in prison).’

I’m not suggesting there’s a simple answer to helping kids who have begun life in traumatic circumstances, but I imagine that money, the opportunity to explore enlightened attitudes and making this a real priority for our society might be a good thing.

Gerard: And then there's Jesse's dad, Ray. He seems to counterpoint Jesse's anger with a sense of defeat. I do think you've sown enough hints to suggest that there was a fire in him before this book. Will this be reignited? Perhaps in a follow-on tale?

Nigel:  Very astute. Ray has a violent past that was rooted in a gang culture. The change came when he went solo and met his wife-to-be. It wasn’t long before he became the victim of her violent outbursts. Something in his upbringing wouldn’t allow him to fight back against a woman and he became trapped by his love for her. Imagine the humiliation a hard man might feel after regular kickings from his missus. It alienated him from the outside world and led him to escape into the bottle. The fire was extinguished and he was wrecked.

This also relates to the previous question about Jesse’s anger. I think that his father’s helplessness and inability to protect his son are key ingredients in that emotional mix.

As for the next book, Ray is a major player and there’s certainly more of his frustration and defeat. Whether that leads to the reigniting of his fuse or not, I’ll leave that to the readers to find out.

Gerard: The chapters written from Jesse's perspective make him seem older than primary school age. It also seems intentional since you counterpoint his character with a lot of innocent notions. Is it safe to assume that you're aware that a tougher life can make kids think and act in surprising ways? Were you worried anybody would challenge Jesse's maturity?

Nigel: I was never too concerned about the question of Jesse’s maturity. You put it well in the question - a tough life can certainly give a child a range of experiences that may force them to grow up very quickly. That maturity is also a veneer that covers the other frailties and vulnerabilities of childhood. My intention was to find the balance between those points and I hope I succeeded.

I did have other concerns about Jesse’s age. I worried that it might be difficult for the book to find an audience. It may be about a young lad in a dysfunctional family, but it certainly isn’t a young adult or new adult book. It’s about darker areas of our world. I think there are people who find it difficult to view youngsters within that context. It might also put off readers who ordinarily enjoy stories within similar settings. The idea of having a twelve-year-old as a main character might suggest that it’s not gritty enough. Even when this was pointed out to me, I decided to stick to my original intention – Jesse was far too ingrained in me by then to alter who he was.

On the flip-side, keeping Jesse young has allowed me to take him on a journey towards adulthood. In my latest visit to his world he was fifteen and growing up extremely quickly. That’s been a real treat for me as a writer.

Gerard: If you could spend a little time with Jesse and Ray, would you have any advice to impart on them?

Nigel: None that they’d accept. I think Jesse tends to make good decisions - his problem is more that circumstances keep turning against him. I’d tell Ray to stay in Belfast. See if he couldn’t carve out a life over there. That makes a lot of sense.

I do like the idea of spending time with them. They’d be good company. We could talk about music all night and I might be able to get Ray to throw in a few tales of his wild years. That sounds like a lot of fun.

Nigel Bird is published by the awesome Blasted Heath and can be found on Twitter and Facebook. Keep up with this guy!