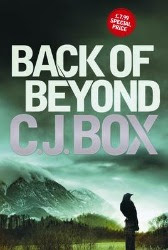 CJ Box is the author of nine novels including the award-winning Joe Pickett series. He’s the winner of the Anthony Award, Prix Calibre 38 (France), the Macavity Award, the Gumshoe Award, the Barry Award, and an Edgar Award and L.A. Times Book Prize finalist. Box was named 2007 Writer of the Year by the Rocky Mountain Fiction Writers. His short stories have been featured in America’s Best Mystery Stories 2006 and limited-edition printings. The novels have been national bestsellers and have been translated into 13 languages.

Nice to see a new post, gb. I haven't gotten to Box yet, though he has many fans here, but he certainly has good taste in crime reading!

Like Seana, I haven't got round to reading Box's novels yet, although they're high on the wishlist. And yeah, he does have fine taste in crime fiction.

Seana and Mike - Yup, great taste. And I have to say, he's very much worth getting around to.