(I could introduce the following piece, but I think it speaks for itself in all its PR professionalism. As for what this event is doing for the crime fiction scene in Northern Ireland? Just have a look at the smile on Stuart Neville's face in the accompanying photo [Stuart is the slightly smaller giant on the left]... gb)

Following the success of his recent book ‘The Twelve’, internationally recognised Armagh author Stuart Neville will be joining legendary US crime writer James Ellroy, at the Waterfront Hall on Saturday 7th November.

The evening audience with Ellroy is an opportunity to hear one of the greatest crime novelists in recent years speak about his work, read from his latest and long awaited new novel, ‘Blood’s a Rover’ and listen to his views on crime fiction literature. Local crime novelist Stuart Neville will interview Ellroy as part of the evening.

Ellroy is author of the acclaimed LA Quartet, The Black Dahlia, The Big Nowhere, LA Confidential and White Jazz, as well as the first two parts of this Underworld USA trilogy, American Tabloid and The Cold Six Thousand which were both Sunday Times bestsellers.

The forthcoming event has been organised by Belfast’s specialist crime bookstore No Alibis, a bookshop becoming well known for the role it plays in the crime fiction scene in Northern Ireland. Even the shop itself is the setting for the latest Colin Bateman thriller ‘The Day of the Jack Russell’, which will be released in November.

No Alibis owner and crime fiction guru David Torrans said, “It is the first time that Ellroy has visited Belfast and the event is an opportunity to hear the inspired and critically acclaimed crime fiction novelist face to face. The ‘Demon Dog’ of American crime fiction Ellroy, will be talking about his new book, ‘Blood’s a Rover’, which is the third and concluding part of the ‘Underworld USA’ trilogy.”

“It’s great to have one of our most recent novelists Stuart Neville, interviewing Ellroy as part of the evening. Ellroy himself said of Stuart’s first novel ‘The Twelve’ that ‘it is an all out-terror trip and the best first novel I have read in years,’” explained David.

Stuart will have just have returned from a book signing tour of the US to launch his book there, where it is receiving excellent reviews. It was during one of the booksigning events in Denver, that Stuart met up with the literary giant, Ellroy 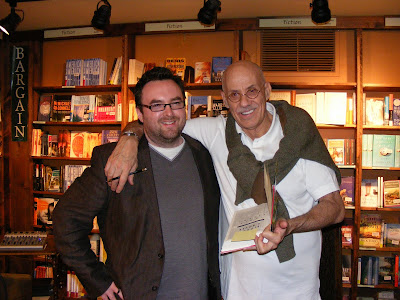 “James Ellroy was one of the first supporters of my own work, which was fantastic for a first time author like me. It was so great to finally meet up with him over in the US. I’m really looking forward to the event at the Waterfront Hall, when we will get the chance to hear Ellroy talk more about his work and what inspires him.”

The Waterfront show starts at 8pm. The ticket includes free entry to the Tiger Room after the show to help celebrate the event and will allow guests to mingle with authors from the vibrant Northern Ireland crime fiction scene. Musical entertainment will be provided by The Sabrejets.

Tickets, price £12 are available from Waterfront Hall Box Office and from No Alibis Bookshop, Botanic Avenue, Belfast on 028 9031 9601 http://www.noalibis.co.uk/

I have to say Mr Neville looks amazingly smug...as he should!
dave

i've got my tickets, looking forward to it!