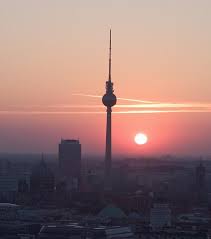 Me and the missus just got back from East Berlin. We both enjoyed the trip, though were a little surprised by the less than glamorous state of the buildings and the quality of graffiti attempting to liven them up. The artists have pretty good English, but awful dirty minds. Also, we had a good gawk at an insane amount of Goth-type neo-punks. These guys were the real deal. None of these attention-seeking, middle class emo-kids that pose around Belfast City Hall. We’re talking death-in-their-eyes nihilists of the highest order. Tall, gaunt, unnerving anarchists. Drinking on the train, on corners, in shops. We were fascinated. I wonder are there any good books featuring these interesting miscreants?

Anyway, what’s this got to do with CSNI? Well, when we were sneaking glances at potential apprentices for the Grim Reaper, we were doing the tourist stuff. Sight-seeing and shopping. And just for the craic, we stopped into a bookshop called Thalia. Very nice place. And the krimis section was among the biggest within the shop. Filled with all the names we know translated into German. McDermid, Rankin, Gerritsen, Child, Walters et al. And they seem to have a real thing for John Connolly. A lot of his books on the shelves.

So, says I, “Where’s the NI crime fiction contingent?” 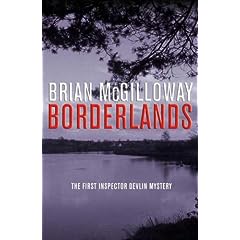 ack. Good thing too. If there’d been nobody to represent us in that krimis section I’d have made my way to the nearest employee to voice my concerns in slow, loud English. As it was, I was able to shout across the shop to my spouse, wave a copy about the place and generally draw attention to it. Then I put it face out on the shelf. I missed Mr McGiloway’s signing at No Alibis last Friday so it felt good to promote him in such an unorthodox manner. I wanted to wait around and see if any of the German readership would bite, but the missus wanted to look at shoes.

I couldn’t find any Bateman, McKinty, Millar, Johnson or Bailie books in the German translation section, which bugged me a little. Crime seems to be pretty big over there. Maybe you boys should have a word with your publishers? I did find some of the above in the foreign language section though. Saw Irvine Welsh there too. Imagine trying to read his stuff with English as a second language. That’d be a head trip.

Dich, loses something in translation. I tried the phrase on my better half a number of times in varied tones and cadences over the weekend and got nothing more than a dirty look.

As well as shopping, I finished reading Brian McGilloway’s Borderlands and read Jason Johnson’s Alina. Reviews of both should follow soon in quick succession.

conversely....how many German crime books would you pick-up in a bookshop near you?
do Germans write crime?

Glad you enjoyed the trip and your absence on Friday is forgiven due to your sterling publicity tour in Germany on my behalf. Glad to hear there were some copies about - all kudos to Dumont Publishers.

Borderland's out in Japan next year, if you fancy doing a spot of shelf-bothering on your next holiday too, it would be much appreciated...

That's a very good point, you know. I haven't got one thing by a German writer. Something I should look into maybe? Let me know about Fauser when you get to him.

Not a problem. Hope all went well on Friday for you.

Japan, you say? Good enough for me. Wonder if easyjet fly there yet.