Reading in the Air Last night I attended the most unconventional book event ever. Seriously, I doubt anyine can beat this. Organised by the folks at Literary Miscellany, Ian Sansom launched The Bad Book Affair at Belfast City Hall’s exhibition space and the Belfast Wheel.

I kid you not, folks.

Attendees were treated to free wine and nibbles as Mister Sansom took the time to schmooze with the crowd. Then Glen Patterson, a Belfast literary giant, introduced Belfast’s lord mayor, Naomi Long, who praised the Northern Irish literary scene then handed the microphone back to Mister Patterson. Following a glowing introduction from said Belfast literary giant, the general theme being Ian Sansom is just great, the man of the moment, the author of The Bad Book Affair, made a wonderful and funny speech about his miserable early years in Belfast, his application to Belfast City Council for a job as a gravedigger and his journey to becoming a writer. He ended the brief talk with a toast and the audience was then led to the Belfast Wheel.

I attended the event alone as my wife, also a Sansom fan, couldn’t make it. Fortunately, my lonely spirits were lifted when I ended up in Ian Sansom’s big wheel carriage. We listened to a pre-recorded reading from The Bad Book Affair as the wheel raised us upwards for a lovely view of the Belfast city skyline in all its orange-lit splendour. Mister Sansom, always good for a chuckle, took the piss out of his reading and treated us to a few quips before disembarking the carriage to sign books as provided by David Torrans of No Alibis.

Not a bad way to spend a Thursday evening, folks.

Incidentally, I've almost finished reading The Bad Book Affair and would heartily recommend that you all run out and buy a copy. 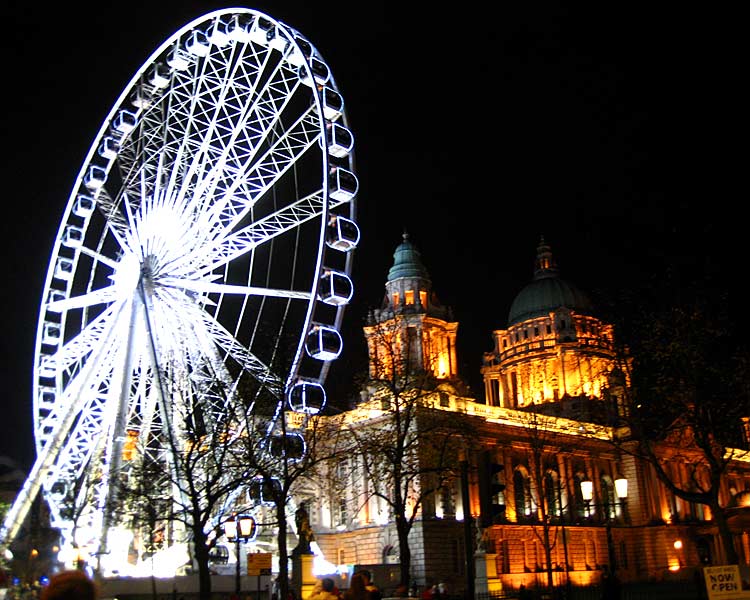 Transworld Publishers and No Alibis Bookstore are proud to announce that
Lee Child,
Author of the Jack Reacher Novels,
Will be appearing at
The Movie House
DUBLIN ROAD
BELFAST
Chat, Reading and Q&A
Wed 24th MARCH 7pm
To Launch his Latest novel
61 HOURS
Ticket Price £12
Call David on 028-90-319601
Or email david@noalibis.com
To Book Tickets

Lee Child, one of the Worlds greatest Thriller Writers, will be heading to Belfast In March 2010.
No Alibis Bookstore, in association with TRANSWORLD Publishers, is proud to announce that they will be hosting an event to promote the new JACK REACHER novel, GONE TOMORROW.
We are in the final stages of confirming the City Centre Venue and will be posting details on our WEBSITE, http://www.noalibis.com/ very shortly.
To register your interest in this event simply email back to david@noalibis.com
Lee Child was born in 1954 in Coventry, England, but spent his formative years in the nearby city of Birmingham. By coincidence he won a scholarship to the same high school that JRR Tolkien had attended. He went to law school in Sheffield, England, and after part-time work in the theatre he joined Granada Television in Manchester for what turned out to be an eighteen-year career as a presentation director during British TV's "golden age." During his tenure his company made Brideshead Revisited, The Jewel in the Crown, Prime Suspect, and Cracker. But he was fired in 1995 at the age of 40 as a result of corporate restructuring. Always a voracious reader, he decided to see an opportunity where others might have seen a crisis and bought six dollars' worth of paper and pencils and sat down to write a book, Killing Floor, the first in the Jack Reacher series.

Killing Floor was an immediate success and launched the series which has grown in sales and impact with every new instalment.

Lee has three homes—an apartment in Manhattan, a country house in the south of France, and whatever airplane cabin he happens to be in while travelling between the two. In the US he drives a supercharged Jaguar, which was built in Jaguar's Browns Lane plant, thirty yards from the hospital in which he was born.

Lee spends his spare time reading, listening to music, and watching the Yankees, Aston Villa, or Marseilles soccer. He is married with a grown-up daughter. He is tall and slim, despite an appalling diet and a refusal to exercise.

Here, There and Everywhere! International Thriller Writers are hosting an article of mine that takes a look at three excellent Dublin-set novels; Winterland by Alan Glynn, All the Dead Voices by Declan Hughes and Dark Times in the City by Gene Kerrigan. Click here to read it.

Also, there's a great interview with Ian Sansom on the Arts Extra Listen Again thingy from Friday. I recommend listening to Ian Sansom any time you can. Having attended some of his creative writing workshops I rate him very highly as a writer, a reader and a literary guru. Plus, the conversation swings around to JD Salinger at the end...

And, finally, I found out from his Facebook page that Colin Bateman's short film Jumpers is available to download on iTunes, he's thinking about writing a new Dan Starkey novel and the University of Ulster is giving him the honorary degree of Doctor of Literature for 'services to literature'. Pretty decent week for him, then!
Posted by Gerard Brennan at 20:53 5 comments: