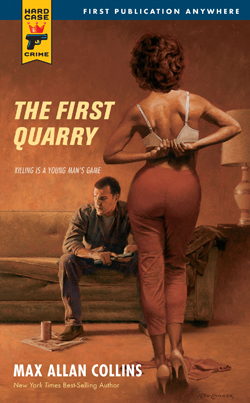 MAX ALLAN COLLINS (Two For the Money, The Last Quarry, Deadly Beloved, The First Quarry)
Author of Road to Perdition, the acclaimed graphic novel that inspired the movie starring Paul Newman and Tom Hanks, and of the multiple-award-winning Nathan Heller series of historical hardboiled mysteries, Max Allan Collins is one of most prolific and popular authors working in the hardboiled field today. He is also a filmmaker whose work includes "Shades of Noir," "Real Time," and the documentary "Mike Hammer’s Mickey Spillane."

I knew from the start that I wanted to be part of Hard Case Crime -- it reflected exactly the kind of book I grew up on, the quarter/35-cent reprints of Spillane, Hammett, Chandler, James M. Cain, and the Gold Medal and Dell originals, Jim Thompson, Richard S. Prather, John D. MacDonald. Those books, with their vivid sexy covers, connected with me as a teenager, and led me to where I am, for good or ill.

Frankly, some people advised against getting involved, at least doing originals, because I can get better money elsewhere. But Hard Case has given me the opportunity to write whatever I choose, essentially -- getting to re-visit my Quarry character, for example, or do a Ms. Tree prose novel. The bonus has been that these books of mine have connected with both readers and reviewers, and have attracted attention to my work in general. THE LAST QUARRY is now a film called THE LAST LULLABY, from a script co-written by me.

There will always be a place for the noir novel -- the crime novels that have heists at their center, or murderous love triangles, or private eye novels with vengeance and/or femme fatales as their engines. They may change physically -- although I think the retro look, recalling not just old paperback covers but movie posters and the films themselves will have enduring appeal. Beautiful women and masculine guys in provocative situations, both in the stories and on the covers, have a lasting drawing power.

I was disappointed in TWO FOR THE MONEY, because I'd been keen to have a really strong, old-fashioned paperbacky cover and I got a fairly stilted design with a guy as my Nolan character (who was overtly described as Lee Van Cleef) looking like Nick Nolte. And I only did my first original because I dared Charles Ardai to get me Bob McGinnis. I said, "Get me a McGinnis cover, and I'll do a new Quarry novel." By God, he came through. The subsequent covers have been fabulous, including the Ms. Tree cover by her co-creator, my longtime collaborator Terry Beatty.

But striking covers aren't enough. Hard Case would be gone by now if the books themselves hadn't been worthwhile.

I read very little fiction. I am almost always researching for the historical crime novels I'm doing or hoping to do. And when I do read crime fiction, I often pick out a series and read straight through. I did that with Perry Mason, Poirot and Nero Wolfe, and not long ago did the same with the Inspector Morse novels, having loved the TV series.

The mystery stuff I've loved in recent years has been TV series, mostly British -- LIFE ON MARS and its sequel ASHES TO ASHES, FOYLE'S WAR, the MORSE spin-off LEWIS, SPOOKS (M1-5), HUSTLE and one American show, VERONICA MARS, which is one of the great PI series.
Thank you, Max Allan Collins!

I'm sure Max has many a war story he could share, but hopefully none of his worst writing experiences had anything to do with Hard Case Crime... (I remember him talking about how he was hired to write the novelization of the movie version of ROAD TO PERDITION, which of course was based on his own graphic novel of the same title. But when he attempted to flesh out the novelization with his unique insights into the characters, the people in charge told him to just stick to the movie's script. That has to have been up there on his list of bad moments.)

that is pretty bad