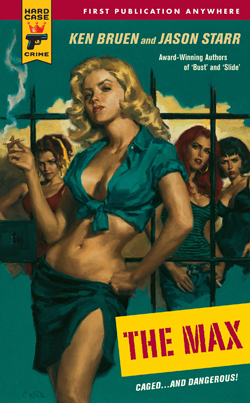 KEN BRUEN (Bust, Slide, The Max)
The Galway, Ireland-born author of more than a dozen extremely dark crime novels, Ken Bruen was nominated for nearly every major award in the mystery field (and won the Shamus Award) for his book The Guards, the first in his series about Jack Taylor and his first book to be published in the United States. In addition to his work as a novelist, Bruen has a Ph.D. in metaphysics and spent 25 years as a teacher in Africa, Japan, Southeast Asia, and South America.

To really be part of the most innovative, exciting publishing event of the past 50 years, the covers, who wouldn't kill to see their name on one of those stunning collectors items and to work with Charles, not only fun but a great challenge.

I think it will make the fat cats sit up and clean up their snotty act, to see that a real committed publisher, who obviosuly cares deeply about the readers is going to make them get off their ivory towers.

Q3. One of the most striking things about the Hard Case novels is the beautiful cover artwork. How did you feel when you first saw the covers for your books? How did the art compare to the conception of the characters you had in mind when you were writing the books?

I went...Holy Fook...still do, and the third cover is the most stunning of all.

Richard Aleas, and here's rooting for that Shamus award; Brian McGilloway, he knocks me out; Tony Black, Megan Abbot, Adrian McKinty, the guy is a friggin genius; Christa Faust; Jason Starr, with his new standalone due soon.
Thank you, Ken Bruen!