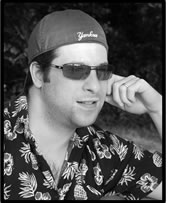 Ronald Malfi was born in Brooklyn, New York in 1977. Along with his family, he eventually relocated to Maryland where he spent most of his childhood growing up along the Chesapeake Bay. He professed an interest in the arts at an early age and is also known to be a competent artist and musician. In 1999, he graduated with a degree in English from Towson University. For a number of years, he fronted the Maryland-based alternative rock band Nellie Blide.

Most recognized for his haunting, literary style and memorable characters, Malfi's horror novels and thrillers have transcended genres to gain wider acceptance among readers of quality literature.

He currently lives along the Chesapeake Bay.

I’m currently between projects right now, though I have spent the past several weeks editing a few short stories as well as proofing the galleys to my forthcoming novel SNOW, which will be out through Leisure Books in March. I’ve also recently completed the screenplay for the film LIFETAKER, which begins production in Canada this spring. Much of the past few months has been occupied with book signings and speaking engagements for my crime novel, SHAMROCK ALLEY. The reviews have been positive and people really seem interested in hearing about the true story behind the fiction for this book. It’s really quite unique.

I typically try to output about 15 pages a night, and I’ll edit those pages as I go. If I can keep this up, I can finish a book in about three months’ time, with another month or so for leisurely editing. This past year has been my busiest, as I had deadlines for three novels coming out in 2010, so I really had to pace myself and not get too far behind. As for ideas, I suppose I have an abundance of them, though many will inevitably crumble apart before I ever start to think of them as stories. I usually don’t outline, so I’ll sit and stew on an idea for a while until I know where it’s going. When the first sentence comes to my head, that’s when I start writing.

When I’m not writing I enjoy the things most everyone else does—spending time with family and friends, reading a good book or watching a good movie, playing music.

Q4. Any advice for a greenhorn trying to break into the literary scene?

My advice is to write. This sounds simple enough, but I am constantly confronted by people who want to be writers, or consider themselves writers, but don’t write. Can I consider myself a rocket scientist even though I don’t tinker with rockets? It’s hard to find time, sure, but that is just an excuse. You have to write. I’ve got a trunk full of miserable, poorly-written manuscripts that I’d written over the years, and they will never see the light of day because they are so bad, but they’re there. They exist. They were good practice, a nice whetstone to sharpen the tools of my craft.

Writer’s I’ve read for the first time this year that have blown me away were Robert Dunbar, author of THE PINES and THE SHORE; Nate Kenyon (THE BONE FACTORY); Michael Beres (CHERNOBYL MURDERS); Donna Lynch (ISABEL BURNING). There are so many, with some of my favorites being Greg F. Gifune, Jeremy Shipp, and David Jack Bell.

I just finished reading Darren Speegle’s outstanding collection A RHAPSODY FOR THE ETERNAL, and some short fiction by Donna Lynch. Fantastic work.

Future plans? Just keep the train rolling, I suppose. Future releases include my novels SNOW (Leisure Books, March 2010) and THE ASCENT (Medallion Press, September 2010), and a small book tour to support both titles. I’ve agreed to write three books for Leisure, a publisher I’ve always been excited about. Medallion has been fantastic, too, with my hardcover releases. THE ASCENT is one of my personal favorites, actually, and I think fans will really enjoy it.

I probably wouldn’t change anything, though if I had to pick something, I might’ve tried to find my literary focus earlier in my career. This is a very staunch and commercially-driven industry. A writer needs to know his or her audience and target that audience. I’ll admit to wallowing in authorbation—basically writing for myself—for a bit before I found my audience and narrowed my focus.

Book signings with pitiable turnouts; a wall papered with rejection letters; your publisher misspelling your name on the mockup cover for the marketing department. But those aren’t really “writing” experiences—more like publishing experiences. Worst writing experience is writing 300 pages of a story you love before realizing that you don’t love it anymore, and you have to abort it and bury it in your yard under the juniper tree. You just hope next spring a better story blossoms.

I love receiving emails from people who read my work. I truly do. I don’t make it all around the country for book signings and to meet people who are interested in what I do, so I find it fantastic when people feel compelled to write to me. Even if they didn’t like the book!

Thank you very much for reading CHERNOBYL MURDERS. I appreciate it. The new sequel just out is TRAFFYCK, the second in the Lazlo Horvath Series.
Michael Beres

I'm very envious of those people who say I wouldnt change anything or Je Ne Regret Rien. That aint me.

Adrian - I get days where I could fall into either of the regret camps to be honest.

I think I'm more the regretter type by nature, but as I get older and the whole business of what the heck we're all doing here gets more and more and mysterious, I kind of wonder how much I could have changed anyway. I do regret some of my behavior towards others, but the road not taken stuff seems to matter less and less.

Or that's my take on it today.

And you know if I was born in Brooklyn and grew up in Maryland I'd maybe regret wearing a Yankees cap in my publicity photo.

Kind of like being born in Moss Side, Manchester and growing up in North London and then wearing a Liverpool cap.

Of course, since it's about sports, I don't really get the inference.

I should regret the hat over the shirt?

I actually love the shirt. In fact I'm kind of in-love with the shirt.

And of course I'm one to talk, being born and raised in Carrickfergus but since '93 a dyed in the wool Yankees fan.