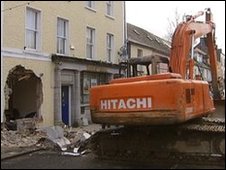 A new crime craze has swept Northern Ireland. Graceless gangs of thieves have been using stolen diggers to smash and grab entire cash machines from unsuspecting buildings bringing a whole new meaning to the term 'hole in the wall'. But they've been sloppy in their disposal of the evidence.

'The remains of two ATMs have been found by police in County Fermanagh.'

Lads! You had a feckin' digger at your disposal. It doesn't get any easier to bury the incriminating remains.

Not sure how the PSNI will put an end to this spate, but next time you need to get some cash out make sure nobody can see your PIN number as you tap it in, check that the machine hasn't been tampered with and look over your shoulder for bloody big juggernauts wielding shovels.

This has been a CSNI public service announcement.

That's hilarious. But I don't get the plan. Those things can't actually move very fast or camouflage themselves very well, can they? What part of town is it that is so isolated to make this possible that still has enough people to warrant a cash machine?

Seana - It tickled me too. I have no idea how they're getting away with it, though. Could you imagine the noise?

I hope you'll keep up with these 'true crime, Norn Iron style' posts. It's good stuff.

Someone was caught a week or two ago here after drilling out the coin boxes in laundromats. It's not small change apparently. But it seems downright unimaginative after those diggers.

And if you ever rip the side out of a building in the middle of a city with a massive piece of construction equipment, BY GOD, DO IT QUIETLY!
================
Detectives Beyond Borders
"Because Murder Is More Fun Away From Home"
http://detectivesbeyondborders.blogspot.com/