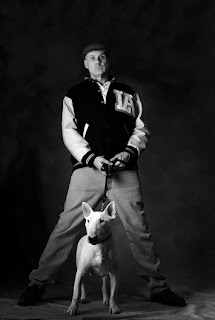 (From the No Alibis Newsletter)

No Alibis Bookstore is very pleased to announce that we will be hosting an event with none other than the Demon Dog of American crime fiction, James Ellroy, on November 7th to celebrate the release of the final book in his Underworld USA trilogy, BLOOD'S A ROVER.

James Ellroy was born in Los Angeles in 1948. He is the author of the acclaimed LA Quartet, The Black Dahlia, The Big Nowhere, LA Confidential and White Jazz, as well as the first two parts of this Underworld USA trilogy, American Tabloid and The Cold Six Thousand which were both Sunday Times bestsellers. It's 1968. Bobby Kennedy and Martin Luther King are dead. The Mob, Howard Hughes and J Edgar Hoover are in a struggle for America's soul, drawing into their murderous conspiracies the damned and the soon-to-be damned. Wayne Tedrow Jr.: parricide, assassin, dope cooker, mouthpiece for all sides, loyal to none. His journey will take him away from the darkness and into an even greater darkness. Dwight Holly: Hoover's enforcer and hellish conspirator in terrible crimes. As Hoover's power wanes his destiny lurches towards Richard Nixon and self-annihilation. Don Crutchfield: is a kid, a nobody, a wheelman and a private detective who stumbles upon an ungodly conspiracy from which he and the country may never recover. All three men are drawn to women on the opposite side of the political and moral spectrum; all are compromised and ripe for destruction. Only one of them will survive. The final part of James Ellroy's "Underworld USA" trilogy is set during the social and political upheaval of 1968-72. "Blood's a Rover" is an incandescent fusion of fact and fiction and is James Ellroy's greatest masterpiece.

Available from No Alibis Bookstore and the Waterfront Hall box office

The ticket includes free entry to the Tiger Room after the show to help celebrate the event. Musical entertainment will be provided by The Sabrejets.