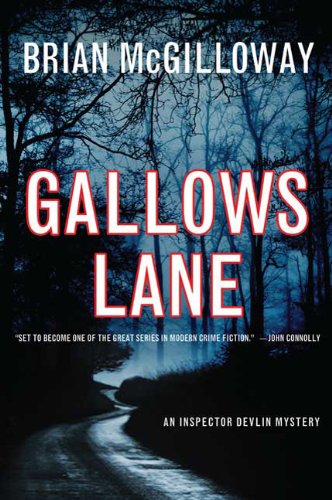 Brian McGilloway's second Inspector Devlin novel, Gallows Lane, will be released in the US on the 29th of this month. In honour of this occasion, I've resurrected my review of said novel in it's UK form (see post below). Of course, that's only my view, and I suppose some people may not put as much stock in it as I do. However, I'm not the only one who enjoyed it. Here are some of the pre-USA release snippets. Stars and all.

'Outstanding... This quietly compelling procedural contains much buried passion, especially in the never acknowledged mutual attraction between Devlin and his female partner. Readers will be gripped as they watch this driven Irish detective seek his place in the moral landscape. (Publishers Weekly Starred Review)

'Devlin, best of fathers and least politic of coppers, is a helluva hero, elbowing his way through a gritty plot.' (Kirkus)

'Refreshing in its outlook, this procedural showcases a rising star in full command of his craft. Strongly recommended.' (Library Journal)

Not bad at all, eh? So, my American friends. Add this one to your payday pick-up list.

I didn't know Brian's sophomore effort was coming out in the US around the same time as my debut. I shall do my best to plug Ireland's Nicest Crime Writer when I'm over there in a few weeks - the subject of Irish crime fic is about to be one that comes up repeatedly, so I will champion the cause.

This looks and sounds so awesome! I can't wait!!

Stuart - Good man, yourself! May you receive the writerly karma you deserve.

Keith - Wait 'til you read Bleed a River Deep. Guy gets better and better.

April - I can tell you, with my hand on my heart, Gallows Lane is awesome.

Hi Gerard
Many thanks for the support. Much appreciated.
Stuart - good luck with the US tour - hope it goes well, (even without mentioning Gallows.)
Thanks for the kind words, Keith - I'm glad you enjoyed the book.
Hi April - I hope you like Gallows Lane if you get a chance to read it.