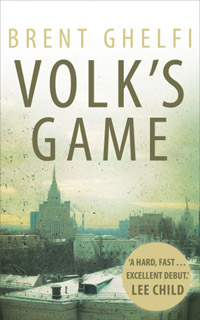 “What do you know about art, Volk?”

The opening line of Volk’s Game by Brent Ghelfi, and a question that leads to much trouble for the cold, hard Russian gangster, Alexei Volkovoy (AKA Volk). Lee Child provides the front cover quote on the Faber & Faber paperback – “A hard, fast... excellent debut.” And frankly, I have no argument with that at all.

Volk’s chilling reputation as a veteran of the Chechen war and his current status in the crime underworld qualifies him for a risky art heist. Employed by the psychotic mafia kingpin, Maxim, and accompanied by his beautiful lover and guardian angel, Valya, Volk's already complex and close to impossible job goes pear-shaped, and then the real trouble begins.

This novel is chockfull of twists, turns and outright squiggles. Barely a page goes by without an injection of action. There’s a fair whack of suspense and the violence, though far from splatter and gore for the sake of it, is very hard-hitting. If you’re looking for some hard-boiled, tough guy fiction, Ghelfi provides it in spades. And there’s the added bonus that the tale is set in . I’ve always had an interest in the place, though I’ve never had the opportunity to go see it for myself. However, this book won’t have you reaching for your passport, as the depiction is bleak, bleak, bleak, to say the least. But then, the world Volk inhabits is a far cry from the kind of places a law abiding citizen would be used to. And it’s nice to step out of the comfort zone and rely on the writer to paint a terrain the reader is unfamiliar with. Ghelfi has spent a lot of time in , and this book is proof that he’s taken in every detail.

As a protagonist, Volk is of the risky, easy-to-hate mould. His past leads you to feel some sympathy for him, and Ghelfi masterfully gets you on the gangster’s side for a good portion of the book. But he does this, in my opinion, in order to heighten the impact when he whips the rug from under the reader. By the end of the novel I was conflicted in my opinion of Volk. The only thing I knew for certain, was that I wanted to learn more about him. So, I’ll be eagerly anticipating the follow-up, Volk’s Shadow.

The entire cast is made up of well-drawn, three-dimensional characters, right down to the bit players. The plot is tight and interesting, though not overly complex. The prose moves fast when it needs to, but takes the odd detour to paint some excellent visuals. Ghelfi can write. No question about it.

He’s not quite in Adrian McKinty’s league, but there are some very interesting parallels in both writers’ protagonists. Michael Forsythe, from McKinty’s Dead trilogy is also a tough gangster-type with ties to the military. And he’s getting by on a prosthetic foot. So too, Alexei Volkovoy. And both characters are experts in getting themselves into some seriously intense no-win situations and getting out by the skin of their teeth. For me, Forsythe has the edge due to his black Northern Irish humour, but Volk comes in at a close second.

So, if you’re a McKinty fan who’s read all he has to offer, I’d urge you to give Ghelfi a chance. Volk’s Game is a blistering read. A literary Molotov cocktail. The plot has more layers than a Babushka doll. You (must go) buy it... You get the picture, no?

It's a really great read. Exciting, fast, great locations and funny. And dont forget Volk's Game got nominated for a Thrillie Award which was pretty cool for a debut novel.

Also Volk's Game was edited by the talented and beautiful Sarah Knight who edited all my Dead books and who was also my editor at Holt too before defecting to those lucky people at Random House.

One qualm though Ger. What's the Irish connection? or are you just reviewing whatever you damn well please these days?

Adrian - You're a fan, then. What did you think of the coincidental prosthesis?

And, yeah, you caught me. No Irish connection whatsoever. But I think it's healthy to let the odd non-Irish title slip through, just so folk know I'm comparing you lot to the best of the best. So yeah, I'm reviewing whatever I damn well please.

Anyway, we're agreed. It's a great book. I loved Valya as a character. I reckon she should get her own Play Station game.

Valya: muy calliente as they dont say in Russia.

Sarah sent me the book in galley. I didnt even twig the coincidence until I'd finished it. I dont know if she was worried I'd be upset or anything, but I wasnt at all. Terrific book.

Adrian - Aye, the similarity doesn't harm either character in my opinion. Just makes for a funky commonality.

I just happened upon this little dialogue and I'm deeply thrilled to see two of my very favorite writers compared and contrasted in one blog. What can I say? Apparently I have a [prosthetic] foot fetish.

Hi Sarah! Thanks for dropping by. I must let Adrian know you left a comment.