A Micro Review - On The Brinks by Sam Millar 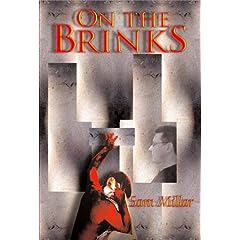 Colman Keane, a um... keen fan of all things crime fictiony, has submitted his thoughts on Sam Millar's autobiography, On The Brinks, to CSNI. Did he like it? For his sake, I hope so. I wouldn't want to piss Mister Millar off!
It’s difficult to know where to begin to describe this book – a memoir written by Mr Millar a former IRA man and convicted bank-robber.

To describe Sam’s path through life as being somewhat eventful, would be a massive understatement.

Imprisoned in Long Kesh, he participated in the blanket protest along with other Republicans in an effort to restore political status to all paramilitary prisoners. I vaguely recall growing up in the 70’s and seeing the pictures of prisoners draped in blankets and living in the most abhorrent conditions imaginable. It is hard not to be repulsed, moved, touched, affected by what these men endured in the struggle for recognition of their special status. The closest thing that I have read that parallels Millar’s plight is Slavomir Rawicz’s The Long Walk.

At times he’s afraid, but the absolute refusal to be cowed, the resolve and determination to endure and prevail is daunting and a testament to his indomitable spirit, just like Rawicz displayed during the 40’s.

Whilst dark at times, Millar also manages to retain his sense of humour throughout. The blankets escalated in the early 80’s to the hunger strikes – a turbulent period in Ireland’s recent history which culminated in the death of 10 men including Bobby Sands, who had managed to embarrass Thatcher by gaining election to Westminster as an MP. Millar survived this period and headed off to States after his release.

Further trouble ensues in the American chapters of his life. A leap from croupier in an illegal casino to mastermind of the Brinks depot robbery of over $7 million and further imprisonment.

Sam Millar was finally released in 1997. One hopes the ensuing years of his life are less frenetic and more settled!
Thanks, Colman!

I have posted here before about the wonderful Lucy Caldwell and the equally wonderful Adrian McKinty. I was on Lucy's website and was excited to see that she has written a story that has appeared in a volume called Belfast Nights. Did you review this book and is there somewhere I can buy it? thank you,

Hi Seandra - No need to introduce yourself, I remember you. Thanks for stopping by again.

I emailed Blackstaff Press about the upcoming Belfast Nights, but they still haven't set a publication date, or even a final table of contents. However, rumour has it that Mr McKinty could also have a story in this anthology. Colin Bateman contacted quite a few Northern Irish writers when he was putting the collection together. I've asked the publisher to give me a heads up when any news breaks so as soon as I know something, I'll post it here.

I'm VERY excited about it too!

Oh it isn't out yet? Ok, I will keep tuned in to your site. Lucy is definitely in there so I will probably buy it when it comes out. I hope there are a lot of female writers and not just her though!

I just got my first Colin Bateman book from the library. I am looking forward to that too.

Yeah get Bateman from the library, that guy's loaded.

BATEMAN............must be minted, my son made me go and see his film the other evening......Christian Bale was really annoying with that guttural growl.....does Bateman really talk like that?

Colman everybody from Bangor talks like that. Ever been in the Royal Ulster Yacht Club? No me neither, but I imagine they all wear capes and masks too, pervs the lot of them; actually it's probably a bit more like Kubrick's Eyes Wide Shut than the flick you just went to...Nice piece BTW.

You are all very funny. Actually my 13 year old son has a close 'girl who is a friend' called Robyn. They are known as Batman and Robyn.

Actually, that's a typo. They're known as Bateman and Robyn. Which is funnier. I think.

Of course the Bateman was listening in. Now we're for it. I take back everything I said about Bangor. Fine bunch of people. Salt of the earth. Much better than those stuck up bastards in Ballyholme.

'Robyn' of course is the name of my favourite Swedish hip hop chanteuse, sort of a cool Bjork - feel free to mention her when you want to be "down with the kids." No need to thank me, the journey is its own reward etc. etc...

I grew up in Ballyholme. You're doubly for it now.
Bateman

Two of my new favourites.

Thank you again for your site, Gerard.

Adrian, don't worry - he can't run very fast, his tights are cutting off his circulation

And you to.
Bateman

I'm surprised you would mention the tights in an open forum. Of course it's an open secret around Belfast Lough, but I didn't want to be the first to say it.

oh shit....sorry lads, I thought I only had to keep schtum about the time he got into bother with the bearded nun and the midget from the travelling circus with the paddling pool full of raspberry jelly.....I think only getting an ASBO was more than fair under the circumstances....ah bollox - done it again

Colman, I hope you've got pictures of this.

One time we played rugby against Bangor Grammar, it was a cold day and their winger was wearing what looked a lot like tights, now that I think about it that could have been Bateman.

this is great stuff, thank you colin, colman and adrian for cheering me up.

Seandra - Yes, the film is very good. One of the best book to film conversions I've seen, in fact. David Thewlis made the perfect Dan Starkey. Though I once heard Robert Carlyle was offered the part at one point, which would have been interesting.

Definitely worth tracking down...

thank you for that. I've put it on my netflix list. I dont know if Colin is still reading at this point. Do you know when he might be coming next to the DC area?

An American publisher would help. At the moment I'm confined to three miles from Dublin.
Bateman

Seandra - There you go. Straight from the horses mouth. But since his last book (Orpheus Rising) was set in Florida, there's probably hope for the future.

I will keep tuned in the hopes of a tour. Florida is about a 6 hour drive from DC but I'll do it!

Thanks again Colin and everyone.