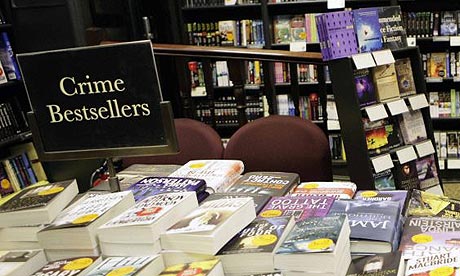 I took a dander out to Waterstones and Eason during lunch today. At Waterstones I was delighted to see Adrian McKinty’s Bloomsday Dead, Aifric Campbell’s The Semantics of Murder, Declan Hughes’s The Dying Breed and John Connolly’s Reapers all on the 3 for 2 table. Not that long ago I was complaining that McKinty’s work wasn’t getting enough high street exposure. I even emailed his Publicity Manager at Serpent’s Tail to ask why it was so hard to get his books in . Of course, I doubt it made any difference, but god damn it, at least I tried! And I’m sure Hughes and Connolly are no strangers to the 3 for 2 table, but to see ’s debut on the table was very cool.

Eason, on the other hand, was showing much love to the NI writers, Bateman and Brian McGilloway. Their most recent offerings were on their 3 for 2 offer. And all of Sam Millar’s fiction could be found in the crime section. They only had Bloodstorm at Waterstones.

Now, all this being said, I still prefer to buy my books at independent bookshops, such as No Alibis. The guys that work for the bigger chains just don’t have the knowledge or passion of a true-blue book-geek. No offence intended, some of the sales assistants are nice people, and good at their jobs, but they’re trained SALES assistants, which doesn’t mean they’re book lovers. Their skills could, in many cases, transfer to record shops, makeup counters or even used car forecourts. But you can’t ignore the power the high street shops have to make or break a writer’s career, so I was happy to see all these quality Irish writers holding their own amongst the Cobens, Connellys and Hayders.

And so, I headed back to work with a spring in my step.

Well... not quite. One small detail did depress me a little. Outside Eason, a queue of women, girls and a smattering of bored boyfriends were queued from the bookshop’s entrance right around the pretty distant corner. What were they there for? Westlife were coming to sign their new book at 5.30pm. Now, I was out and about at 12.30. For those of you reaching for your calculators, that’s a whole five hours before the collection of crooners were set to make their appearance. A bloody crime against fiction, if you ask me. Nobody ever does, though.

With regards your comments about independent vs big chain store, I couldn't agree more. There used to be a world renowned SF/fantasy/horror store in Birmingham, and it was a delight to shop there. They stocked thousands of titles the big guys ignored, as well as organising regular signings and sending out catalogues to the punters. It was, in a nutshell, indispensable. It closed a few years ago, after thirty years of trading, because people browsed the shop then ordered from Amazon or went to Waterstones down the road to save a quid or two.

Which is business, I suppose. Trouble is, this kind of shopping has a rippling effect all through publishing, where the accountants hold sway. Decent publishing deals only go to those established writers who can get on the main table in the chain stores. That might be an oversimplification, but it'll suffice. It's too early in the morning to be writing an essay. Anyway, buying books from Waterstones and Amazon, rather than the independent or specialist stores ultimately means less choice for keen readers like us.

You know, if you do feel like writing an essay on the topic, I know a blog that'd be interested in featuring it...