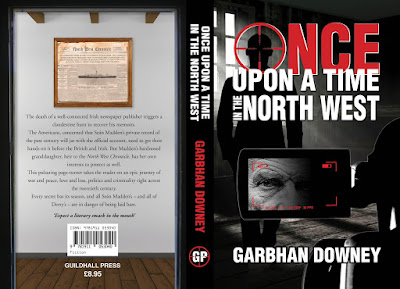 Garbhan Downey has spent 25 years in the publishing industry in northwest Ireland as a journalist, writer and editor. He has also worked for the BBC as a producer and presenter. A graduate of University College Galway, he lives in Derry with his wife Úna and two children. Once Upon a Time in the North West is his eighth novel.

Chronicle of a Century

The death of a well-connected Irish newspaper publisher triggers a clandestine hunt to recover his memoirs.

The Americans, concerned that Sean Madden’s private record of the past century will jar with the official account, need to get their hands on it before the British and Irish. But Madden’s hardnosed granddaughter, heir to the North West Chronicle, has her own interests to protect as well.

This pulsating page-turner takes the reader on an epic journey of war and peace, love and loss, politics and criminality right across the twentieth century.

Every secret has its season, and all Sean Madden’s – and all of Derry’s – are about to be laid bare.

‘Expect a literary smack in the mouth’

Labels: Garbhan Downey, Garbhán Downey, launch, new release, Once Upon A Time In The north West