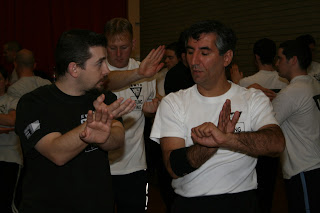 So, the Irish — even us Northerners, whatever the religious flavour — are often the subject of stereotypes. Is that fair? Frankly, I don’t give a feck. Maybe that’s because I’m too busy drinking, fighting and writing.

Nah, just exaggerating a little. Don’t let the facts get in the way of a good story, right? That’s a bit of an Irish tradition too.

I write. That’s a fact. You can find my stuff online or on bookshelves in some very select places. And yes, I do enjoy my booze, but I’m considered a light drinker in many circles. I don’t drink much for an Irish guy sums it up. My fighting is done in the form of sparring at a small local boxing club. I’m no pro, obviously. I’m don’t even consider myself good enough to be an amateur boxer. But I hold my own at our wee club and I know what it feels like to take a punch. Not bad for a guy in his thirties.

Actually, I learned what it was like to take a punch a long time ago. I wasn’t a troublemaker (honest), but I must have grown up with a face that people liked to punch. In school, playgrounds, and later in pubs; I’ve been in my unfair share of scuffles. For a short time in my teens, I lifted weights and walked with my chest puffed out, but I was always vaguely aware I might not have been properly equipped for a street fight, should I find myself in another one. I got into martial arts in my twenties and eventually became an instructor. Even opened my own kung fu club for a short time.

I met lots of great people with interesting stories and backgrounds while I studied and taught kung fu. Also met some not-so-great people who had ideas above their station, but let’s keep this civil. Those years gave me a great insight into fight psychology. Rich material for a writer.

There are many reasons to learn a martial art – self defence being at the core – but for some it’s simply about the urge to fight and finding an appropriate outlet that is legally and socially acceptable.

During my time as a martial artist, I also became a bullshit artist, or in politer terms, a writer. I hang those labels on myself with a lot more confidence now than I did in my twenties. Back then I would tell you, I do a bit of kung fu and/or I like to write. The titles, martial artist and writer, in my opinion, had to be earned. Now, either I’m more laidback about most things or I believe I’ve done my time, but these titles are just words to me now. And, words have become my stock and trade. I can call myself a writer because I can prove that I can write.

If you can fight, there’s no point telling me about it. Especially not on internet forums. Even if somebody calls you out, what’s going to happen, really? Premeditated assault? Probably not a good idea. But there are ways to prove yourself, if that’s your thing.

Should you go to a bar and pick on some guy? NO! Don’t even think that, you looper. Just keep your prowess to yourself, and feel safe in the knowledge that you can rely on it if you ever have to.

Shut up and fight. But don’t do something stupid that’ll get you arrested. Simple, right?

The only real way for a fighter to test their mettle these days is through combat competition. And I have nothing but respect for any man or woman who steps into a ring, a cage or an octagon. Fighters, of any style, are cool in my book.

What’s my point? I’m a writer, not a fighter, I guess. And I’ve no desire to be a fighter. At some point in my life, before I turn forty, I might step into a ring just for the experience. It’ll be some sort of white collar boxing event, I’d imagine, but I’ll train for it like I’m stepping up to a pro. I’ll go in prepared to crack some ribs or get my bell rung by an unseen right hook, then I’ll recover, laugh about it, write about it, daydream about it, and go back to light sparring at the club until I’m too old to raise my gloves. If that takes the form of boxing, Muay Thai or MMA, so be it. But I’ll have an interest in scrapping for a long time to come.

Which is why I was delighted to pen a novella as Jack Tunney in the new Fight Card MMA series. An old-school writing style applied to a modern sport and publishing model. An opportunity to exercise my writing muscles and draw on some of my low-level fighting experience. And an Irish setting? Writing Welcome to the Octagon was a no-brainer. Making it about an underground scrapper with greater aspirations was my most obvious move. I resisted playing on the booze stereotype, though. Gotta keep the readers on their toes. My protagonist has sworn off alcohol to become a better competitor.

Will this blend of experience and whimsy prove to be a knockout? Why don’t you read it and let me know? What have you got to lose? It’s only writing. About fighting. Nobody needs to worry about getting knocked out, except for the characters.

WELCOME TO THE OCTAGON

US Kindle Version
US Paperback

Welcome To The Octagon is a great read- yes, the story is about fighters...but actually it's about the human spirit - great writing is just great writing and GB does it with style.

Thanks a million for the support Ms McDroll (or may I call you Fifi?). I really do appreciate it.

I'd read it, oh I forgot I already have!